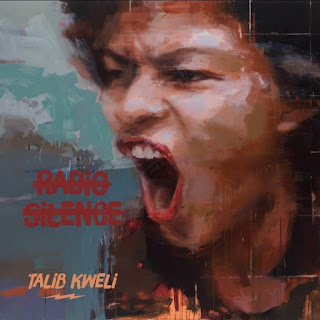 Brooklyn Black Star and Reflection Eternal emcee Talib Kweli had been teasing his Radio Silence solo album since 2015 (at the most recent) so for it to come a full two years later is just enough time for fans to wait, even with the other projects Kweli's label Javotti Media made in the interim. Relax and exhale because the anticipated album, finally here, passes the hardest critical tests. With that cool, post-2010 Talib Kweli feel (in other words the first impression made after Javotti's inception), Radio Silence is an indie affair of flyness, anthems, calm vocal protest against violence in the streets, love, and guests from the under- and aboveground, all of them, even Waka Flocka and Rick Ross, pulling substance out for this particular artist and occasion. Despite all the wisdom and awareness in the author, the subject matter takes only some risks and not quite seismic, and the production, while prominent, won't have everyone coming back for seconds or thirds. It doesn't match the perfection or near-perfection of Talib Kweli's earliest work, but because it's nicely conscious, free of any major slip-ups and arriving at a time when mainstream rap is lowering its performance-related standards, Radio Silence really can catch on and silence the radio. (3 out of 5 stars)
Album Review Hip hop Hip-hop Javotti Media music new music rap Talib Kweli
Reactions: