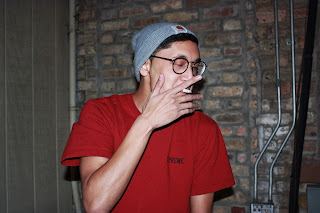 Filipino rapper Ano Ba is one of the most exciting young talents to emerge from the Chicago hip-hop scene over the past couple of years.

Since debuting in 2016, he has been creating a refining a sound that is true to his Chicago roots while also expanding and evolving as a musician.

After the May 2017 release of his 4-track EP, Mayari, Ano Ba has been releasing loose singles with unconventional flows and a more lighthearted feel. His latest cut, "logan squares," is his most experimental yet, with a Cowboy Bebop (a popular anime series released in the late '90s) sample and a flow inspired by mumble rappers.

"logan squares" is also Ano Ba's first release with him handling production duties, along with co-production and mixing by his longtime collaborator KC.

Before premiering the new single with OK-THO, he gave us some quick insights about the song and his forthcoming projects. 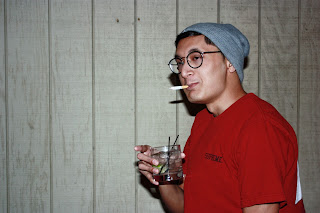 OK-THO: The new single, “logan squares,” is a big change from your previous work. What more can you tell us about the new track?


Ano Ba: I wanted to take what I like about the whole mumble movement right now and make it nerdy, oddball as f---. Familiar but totally left-field.
OK-THO: The music you've released since your last EP has been a lot more loose and fun, is that something you've been striving to do, since Mayari was pretty dark and heavy?


Ano Ba: Mayari was more of a listen for when you're just laying in bed sad. I wanted to make energetic tracks for live performances, parties. And even though the music is more upbeat, I still want it to retain that introspective, reflective lyricism.

OK-THO: The new track samples a song from Cowboy Bebop, and you've referenced anime in your older music as well. How influential is anime to you and your music? What are some of your favorites?

Ano Ba: I liked anime since I was a kid. Not sure if it directly influences my music, but there's ideas in anime that inspire me to create. Akira, Cowboy Bebop, Samurai Champloo are probably my favorites. I also rock with Naruto.

OK-THO: You mentioned that you're working on a new project, how different will it be from your previous EP, Mayari?

Ano Ba: I am! This song will be on it. Mayari, which I've since taken down mostly from my SoundCloud, was a real down-tempo bummer. It felt good to make at the time, but I also felt like it didn't sound like me. Reminded me of every other moody SoundCloud rapper. I want people to hear a song and be like, "this fits their personality." I'll be producing a lot more on this EP. It'll be a lot of quirky, oddball instrumentals and flows.

OK-THO: How do you feel about your place within the Chicago hip-hop scene at the moment?

Ano Ba: I feel fine. Maybe a couple people here and there will show support but I'm nobody, which I like. I can figure out how I'm getting lost in the saturation and how I can be myself, stand out.