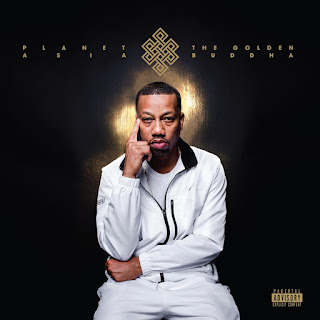 What up OK-Tho audience? It's my pleasure to bring you my first review of 2018! We kick off the year right with Planet Asia and his latest effort The Golden Buddha.

The Fresno MC is fresh off of a strong 2017 which featured well-received collaborative albums with producers DirtyDiggs (‘Dirty Planet’) and Apollo Brown (‘Anchovies’). For 2018, Asia teamed up with Bay Area producer izznyce for this true solo project, sure to be considered the next classic in his vast catalog.
‘The Golden Buddha’ was produced entirely by izznyce (producer for Superstar Quamallah and more) and features AZ, Hus Kingpin, Turbin, Marvelous Mag, Killa Kali, TriState, Xiomara and The Architect.

Speaking on the project, Planet Asia says: “This album represents the foundation of what Planet Asia is about and that is ‘balance’. Me and izznyce also took our time with the record, and had a chance to really vibe out and make the type of music we personally like that will stand the test of time!”

Asia is sure to let you know that he'll go head to head lyrically against anybody with no fear on tracks like Fireworks and Shots at your highness ft. Turbin. Asia is also sure to pay respects to those who deserve it with Hood Legends which comes with a beat that won't stop knocking until the track ends. Asia sticks to shouting out the worthy on Salute my G's.

If eerie beats and street tales are your thing, Siddhartha and Smart Too Late are just for you. To find Asia on smooth OG shit, then look to Magnetic Lord, Fast Not Slow ft. AZ, and Fly Writings for songs that provide jazzy, hypnotic sounds and reflective vibes.

The last track I'd like to discuss is I Climb featuring Marvelous Mag, Xiomara, and Hus KingPin. This track is without a doubt the most inspiring and uplifting track on the album. It expresses the grind, and the urgency to achieve success and better your situation.

What else is there left to say other than the fact that Planet Asia has once again done exactly what I expect him to do on every project, deliver.