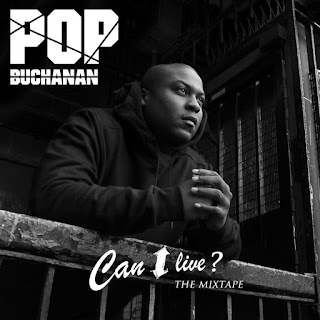 Pop Buchanan has a long and steady movement coming out of New York City. The Brooklyn native established underground notoriety with a single featuring Council and Big Kap of Hot 97 titled, “Bananas.” Consistent airplay on DJ Red Alert’s “5 O’Clock Free Ride” had Pop’s name buzzing. Opportunities to work with producers such as D.R. Period (credits for Cam’ron, M.O.P.), Hassan of Phantom of the Beats (credits for 50 cent and Ghostface Killah), and Jaz-O (credits for Jay Z), also helped fuel Pop’s progress. As the year closes out and we segue into the new year, Pop unveils his sophomore mixtape, “Can I Live?”. Featuring production from DJ Premier, Nudge-Nudge, and Ed-Ape, Pop drops exclusive freestyles and powerful verses; further solidifying him as a lyrical genius. Pop believes that lyrics matter, and on his journey to his first big bag from music, he asks, “Can I Live?”.