Skyzoo - In Celebration of Us (Review) 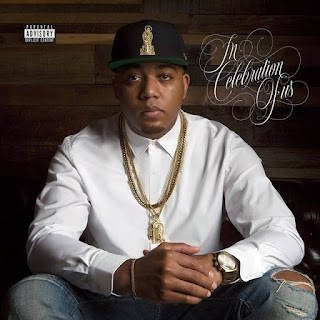 Brooklyn's own Skyzoo has been a favorite of mine since he dropped Music For My Friends back 2015. Since then he has dropped The Easy Truth with Apollo Brown in 2016, and the Peddler Themes EP in 2017. I've made sure not only to listen to both projects, but review both as well. Skyzoo was 3/3 for me coming into his newest (fourth) studio album In Celebration Of Us, and after sitting with it for multiple listens to digest it fully, I have to say that Skyzoo is now 4/4 with me.

Everybody's Fine kicks off the album in the past where Skyzoo's father tells his man's that he won't be running in the street for too much longer due to his little man being on the way. Like a true homie, the man was cool and said he loves Skyzoo already because he's like his own little man and he'll help look out for him. After the intro, Skyzoo raps about how growing up no matter what was going on, he like most kids growing were told everything, and everybody is fine.

On the fourth track Crown Holder, Skyzoo expresses how on top of his game he is, and how he's the crown holder, so anybody is invited to step up and try to challenge for it.

There were a few beat switches that really caught my ear on some of the tracks on this album, but none more than the switches on Heirlooms and Accessories. Here the beat starts off kind of hypnotic, then transitions into a slightly eerie vibed head-bopper, then fades out on a slow, reflective jazz horn beat. That leads into an outro where a female speaker touches on the flaws and insecurities in the black community. Skyzoo follows up on the black community part of this album on Collateral ft. Jake&Papa by not only rapping about the struggles of a black person trying to prosper, but by throwing in a funny skit in the end about "things black people like."

Remembering The Rest (Interlude) ft. Words & Curves is a deep, spoken word love poem from Skyzoo's woman to him. The outro made laugh here because after Skyzoo said thank you for the poem, his woman simply told him "You're welcome. Now take off your clothes." Skyzoo sticks to showcasing the type of bond that he and his significant other have on Hoodie SZN by showing the type of power it has and shows when he wears it, it's the same power that protects Skyzoo's woman.

Skyzoo reminds you that he has the crown on Black Sambo and expresses that he'll never let it go because he promised his mother that he'd never put it down. This showed me just how diverse of an MC Skyzoo is because he premiered a new type (at least new for me from Skyzoo) of flow over a new type (again, new for me) of beat. This was a banger.

I love the song Parks & Recreation ft. Saba (The singer, not the Chicago MC) because of the hypnotic, swing jazz vibe it gives off. The stick-up tape from "Menace" provided me with one of my favorite lines off the album "Shit can happen overnight if you awake to get it."

The final track I want to speak on is the final track on the album Honor Amongst Thieves. Here Skyzoo speaks on the importance of having both parents in his life growing up, and given that he was a young black man growing up, he especially shines light on having his father. He also speaks on how significant his father was not only to him, but to every other little kid in the neighborhood because they didn't have their own father's in their lives. Skyzoo didn't understand why his mother made him go live with his father when he reached a certain age, but he finally did after realizing how important his father was in helping raise him to be a man. Skyzoo expresses gratefulness for having both his parents in his life because with his mother not only being a good mother, but also realizing that Skyzoo needed his Dad's guidance as well, and then with his Dad being a good father by making sure he kept his head on straight and in the books, it all rounded it up to both parents pushing him and shaping him up to excel scholastically, which helped lay the foundation make him the man he is today.


From the beat switches, the familiar production from IIImind and a slew of other notable producers, to the familar vocals from Saba and Kay Cola (IIImind, Saba, and Kay Cola had a hand in (Music for my Friends) the social awareness of the flaws of the black community, the love story parts of the album, and the personal almost autobiography like tales, Skyzoo delivers arguably his best project yet.

Album Review Skyzoo skyzoo in celebration of us review
Reactions: