Ackurate on his city, start as an artist, etc. (INTERVIEW) 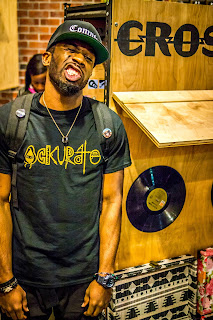 1. My first question is how you got into Hip-Hop? What was your first introduction to the culture and your first influences?

To be honest, I never really paid attention to Hip-Hop until I was about 14. And it was mostly the stuff on the radio. It wasn't until I hit college (around 2009) that I started to do some crate digging and figure out the potential artist that actually spoke to my soul and fueled me to live and do better as a human being.

Elzhi was and still is one of my biggest influence. Not only was he the template of how I truly started spitting, his life when it came to dealing with depression was mad similar.  Pharoahe Monch is another artist that is a huge influence as well, as his creative process is structured around so many different terms and real life experiences.


2. How do you feel about the current state of the Hip-Hop scene?

On a surface level, it's real boring for an artist like myself. I really don't see people challenging themselves creatively anymore. It's very repetitive, which is why I never listen to the radio. Now if your doing ya research, you can obviously see s many different talented individuals doing EXACTLY what their suppose to do as artist, emcees, etc.

People like Joyner Lucas, Locksmith, Rapsody, Evidence, Clear Soul Forces....There are so many folks I could name its crazy. Then you got legends showing us youngins that they still got that gift to show out as well. Black Thought gave the world some soul with his Funk Flex freestyle, but what you expect from a top tier Emcee? Royce Da 5'9 and Premo out here showing out....I know Prhyme 2 is gonna be crazy. So I mean I guess it depends on how deep of a level you look at the scene. It's evolving on all levels.

4. What MC's and producers would you like to collab with the most?

Man Statik and Premo definitely, honestly anyone I named from previous questions. Elzhi is a personal though...Thats gonna happen

It was a struggle, since I live in an area where there are almost no wordsmiths out here. East Saint Louis.....Man they hated me so much out here it was tragic. I had to leave and find somewhere I could thrive as a human being. New York created me honestly,. Being out there for some time molded me into who I am today, both man and artist. Being a daily student of my craft and my own soul was another thing, It made me stand on my own in the arena of artist out here.

Being that outcast and not afraid to be different circulated a buzz around me that kinda forced people into actually listening to what was said and asking questions about the process as well. One big thing though was me finishing college. I'm an English major and Creative Writing minor.....I stop making music to finish school. Some people out here really applauded me for that because it was a stressful thing to completely give up what you love to do in order to achieve a milestone that not everyone gets to hold dear to themselves. College helped better my writing ability.....Most people catch on late, but I don't use any profanity in my art (on wax at least) so everyone can listen. So basically I could perform anywhere with no question.


6. I see you're from East Saint Louis Illinois. Can you tell us about that area, and if there is a Hip-Hop scene there besides you?

Even when the sun shines brightly out here, its always the gray area that shades us. Unity is mad scarce out here, and the "crabs in a bucket" mentality is real. It's not a place for a growing artist who takes the craft serious( least to me). Yet, you make due of whatever you can so it's not the worst place. The Hip-hop......ehh its Trap, Mumble Rap, and Street talk.....I haven't found anyone out here who really has a different style. For an artist in that lane of lyricism......It's very hard to get any love out here.


7. Is showing people that there's more to Illinois' Hip-Hop and the state as a whole than just Chicago?

If you mean is it hard to do that then of course it is. Chicago is the powerhouse city in Illinois, so of course they have more reign. And even though I don't fit my cities mold, I do what I can when I can. That's really all I can do honestly.


Last: What's next for you as a solo artist

New album entitled "Audio Archer" is on the way. More videos and shows no doubt....In my spare time I teach kids and they just gave me authority on creating the very first "School of Hip-Hop" in my area so that's a huge thing to me and the culture. Just elevating daily, learning about myself and ways to maneuver through this artistry and keep the culture preserved. Long as i'm doing that, i'm fulfilling my purpose as an artist.

Before I say peace, is there anything you want to say before we wrap it up?

I preciate the love my brother. Show Love, Be Wise & Never Tarnish Ya MIssion....I live by it.