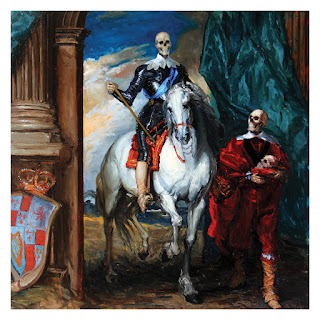 Connecticut MC Apathy has been on my radar ever since his last studio album Handshakes with Snakes. I was simply blown away by his ability to take the traditional elements of Hip-Hop and bring his own originality into the mix. Today I'm hear to review his latest studio album The Widow's Sun. I went into this album expecting nothing less than fire, and I got...just peep the review below.

To set the tone for the album, Apathy exposes the blasphemy in Hip-Hop and comes through a bit braggadocios with the intro track The Spellbook.

After exposing the blasphemy in the game, Apathy rips on Chaos, a track with a royal, horn infused beat where he expresses the slaying of other MC's, which causes the said chaos.

Apathy shows how seasoned of an MC he is on Never Fall Off ft. AG. The beat on this track is royal too. Here both MC's claim that they'll well never fall off, even after being the game for a cool minute now. I personally agree given that neither MC has had a bad feature, or project from what I've seen.

I want to shine a quick light on the title track The Widow's Son for having a nu-metal/rap rock vibe, but not sounding outdated like it's the late 90's/early 00's.

After exposing below par MC's, and then slaying them, order was restored on the track The Order.

On Alien Weaponry, I get the sense that Apathy feels that he has honed his craft enough to claim that he has alien like skills that are foreign and have never been seen before.

The seventh track Hypnosis gives me a predator on the prowl vibe. Like on the 12th track Legend of the 3rd Degree, Apathy expresses knowledge/his own personal philosophy saying  "Believe in the Creator, but don't believe in Satan. I believe the devil's a homo-sapien, and heaven and hell exists in your cranium."

Apathy, Pharoahe Monch, and Pete Rock put on and keep on putting on for the Hip-Hoppers on I Keep On.  Apathy is back to killing MC's with help from  Celph Titled and M.O.P. on Stomp Rappers.

Apathy has done everything from shining light on the cancer's in the culture, to killing those cancer's, to dropping knowledge about it. After all is said and done, Apathy takes the time to enjoy the fruits of his labor with Locksmith but both make sure not to get cocky or complacent. Hence the title of the track Rise and Shine, a track with a laid back vibe.

The final track Obi Wan is an ode to Apathy's deceased father. Apathy touches on the struggle of dealing with this tragedy, like when he expresses that it's hard not to dial his father's number that he still has in his phone, and the void that has been left behind and can never be filled.

Whether he's pulling at heart strings, exposing and killing cancer's in Hip-Hop, or dropping knowledge and expressing a bit of his own personal philosophy, Apathy has delivered once again.