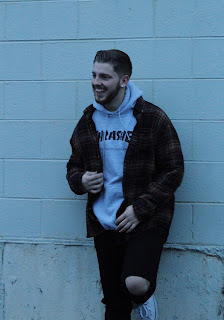 Cam Randall, a rising hip-hop artist from a small town called Agawam in Western Massachusetts, has recently collaborated with producer DK. Randall is currently 20 years old and is rising fast. He has sold out arenas all over the New England area, including Hartford, New Haven, Northampton, Boston, and more. Cam has been rapping since the age of 14, when one of his Facebook spoof raps went viral. Ever since then, his aspirations of being a rapper have been coming true. Having taken music professionally for just two years now, most of his work is posted on Spotify and SoundCloud. In 2016 and 2017 he released many singles including "I Fell in Love" and "Delusional", which have seen great success and helped build up a very loyal fanbase.

Cam has worked with DK to release "Crave", a melodic song that is perfect for easy listening and vibing. The song hits home to many with its relatable lyrics of love and passion between two people. DK, the primary producer, provides great vocals in combination with some phenomenal verses (and even his own vocals as well) from Cam to make a masterpiece. The 3-minute song features some awesome mixing that flows smoothly and cleanly. Recently Cam reached 8,000 monthly listeners and in the spring of 2018, he will be releasing his first official EP. Cam will also have a very busy upcoming schedule with some great performances lined up all throughout the region.