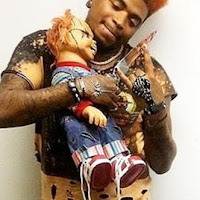 Born somewhere in the 1600th, New Jerzey Devil is a trap artist with a flamboyant appearance that consistently creates a barrage of dope music. The trapstar with rap and emo rock influences began his involvement with music back in high school, seeing his friends freestyle. This inspired him to begin dancing and eventually began making music after seeing how it inspires and influences people's’ lives. Having performed with artists such as Lil Peep and also having opened for T.I., Mike Zombie, and Lil Tracy, he is a truly experienced and mature musician. With influences like KISS, Blink 182, Green Day, and others, his sound is a breath of fresh air that one can’t live without, like a mix of Tupac and Gene Simmons. “Goth Bitch”, his hit piece that was released in October of 2017, is a testament to his impressive skills. Music is New Jerzey Devil's life, something he couldn't live without.

"I drove in a snowstorm to SXSW last year to perform. I love that shit. I breathe music, like I'll die if I'm not making it. I saw the way music inspires others and it made me want to be a part of that culture of this new music and generation. My plans are to change the world and change lives, to spark the mind of this new generation to become one."

Opening up with a mysterious beat, “Goth Bitch” is the perfect piece to chill out to. After the intro, New Jerzey Devil starts a hot verse about the girl whose loved him since he “was nothing”. The song also features artist ionlycryblood, who offers some smooth vocals. He also pulled producer Fantasy Camp on board for the making of the track. The versatile plugins that make up the adventurous sounds of “Goth Bitch” truly complete this unique song, which unfortunately bows out at around 4 minutes. Its resonant ending will leave one singing the catchy tune for the rest of the day. Check out the official audio below on New Jerzey Devil’s SoundCloud, which currently has over 2,000 followers.