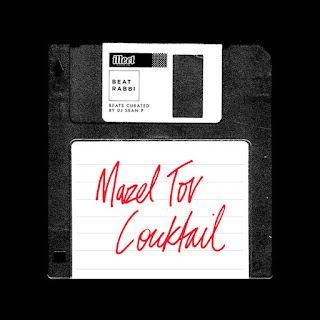 
When asked about the inspiration for Mazel Tov Cocktail, Beat Rabbi shared, "I assume other producers have been in a similar situation where they have a number of beats they really like that have been repeatedly passed over by rappers for years and they think, I really would like to get these joints out there and heard so people know all the kinds of sounds and styles I've experimented with, even if a rapper doesn't want to rhyme on it.  That's how this project started, though it expanded beyond just that. But being that I hung up the beat making trade years ago, I needed the right person to edit, mix and master these beats - and spice them up to make them presentable.  DJ Sean P is that dude for me - I have so much respect for his ear, style and talent and was blessed that enthusiastically signed up for the task. So hear it is - some Beat Rabbi as you have and haven't heard him before, topped off with some Sean P funk."
This project is a bit of a surprise. Beat Rabbi (Deepspace5 producer) retired from beat making a few years back to pursue his studies and focus on family.
Mazel Tov Cocktail is his musical farewell. A 31 track beat tape.