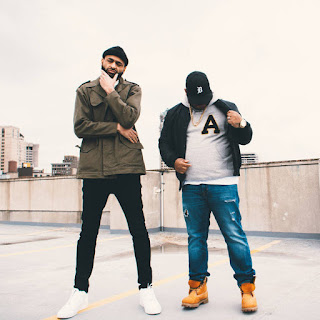 West Coast Berkeley grad, battle rapper and musician Locksmith has hammered out a reputation as one of Hiphop's most enlightened no punch pulling emcees. From his early appearances on MTV's Freestyle Championship to his frequent Shade 45 appearances, Locksmith always brings cutting lyricism that not only questions the status quo but offers deep truths for reflection. Meanwhile Detroit's Apollo Brown has built his illustrious career on emotive production that draws the best out of already legendary mic kings. From his work with Ras Kass and OC, Skyzoo to Ghostface Killah, Apollo repeatedly creates eyes shut, head nodding, and soul stirring perfection for our greatest storytellers to lay their truth bare.

So when Richmond & Detroit came together in the studio the answer was No Question- a new project that finds Locksmith ruminating on everything from advice to his younger self to his continued drive to rise without following in anyone’s footsteps.  After releasing the EP’s title track, the duo is back with their second single, “Litmus,” which is being offered as a free download.

“The music speaks for itself, No Question. It’s just good hip hop, period.” Apollo Brown stated.  “Every track came alive when Lock got in the booth and he literally spit with no paper, no cell phone, no etch-a-sketch...just pure memory. And I’ve been a fan of this man’s mind for a minute! His thought process is crazy, and I finally got the chance to put it to music.”
"It was so refreshing to have such an incredible producer to provide the landscape for my perspective” Locksmith emphasized.  “”The lyrics literally wrote themselves once I heard the tracks."

Apollo Brown is back on 6-15-18 with yet another of the best emcees to ever do it; No Question!