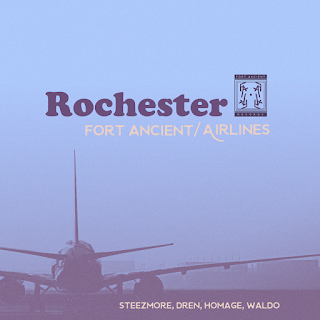 Introducing a new beat tape series from the Cincinnati production power house Fort Ancient Records titled Fort Ancient Airlines. For our debut flight, we got on the plane with zany pilot Dren AD and found ourselves in Rochester. Spend 10 minutes traveling with us and let yourself get away. We will see y'all again very shortly with more tight music.

(Introducing a new beat tape series called Fort Ancient Airlines. Each flight will be piloted by a different guest captain and will showcase the beat prowess of the Fort Ancient Records production powerhouse.
Fort Ancient Airlines is simply there to consume and enjoy as a listener. Our first flight is to Rochester and piloted by the rambunctious ram Dren AD. Beats by Samuel Steezmore, Dren AD, Homage - CVG, Waldo From Cincinnati and one we all made together (staff) Take this 10-minute escape and lose yourself in the clouds with us.)