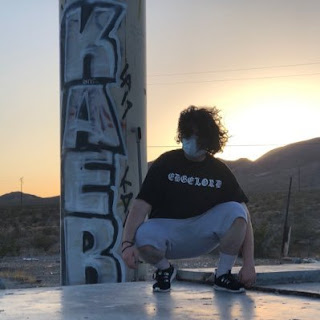 Peace OK-Tho community. Today I have the pleasure of bringing you an interview with Heretic, an artist who I've not only been following for some time now but have also worked with in the past. Get to know one of the most disruptive underground artists in the game below!

Jab: To start off, can you tell us where you're from?

Heretic: I am from Rocklin, California, a shit ass suburb outside of Sacramento.

Jab: I've noticed you have a more experimental, industrial, hardcore, metal/rock vibe infused into your music, can you tell us where that comes from? More so, some of your musical influences?

Heretic: As far as the rock/metal/industrial blend I put in my music, when I find producers I try to find the hardest most melancholy sounding ones I can because I’m usually feeling that way. I actually grew up very close to the underground punk scene in Sacramento so I try to put the attitude and the same type of music in my own. As far as other influences, like 90% of the new generation of mainstream rap is dope imo, asap been killing it, famous dex, I love me some chief keef. But I can go from the punk mental like underground rap to some melodic chill shit like tame impala or even Green Day tbh. I could go on for days man lol I love Louis prima, I fucking LOOOOOVE the fugees, like I really could talk only about this man I’ll spare you.

Jab: How'd you get into Hip-Hop, like what was your first introduction?

Heretic: My very first intro as a corny ass white boy in the burbs was Eminem but literally a week later my aunt handed me enter 36 chambers and I went on my own exploration after that.

Jab: What were some of the first steps you took as an artist to get where you are now?

Heretic: So I actually started back days ago under the same name but doing a way different sound. Once I realized it was like okay to let my inner me out I was all over that shit. My manager @MyNameIsGuy3 actually gave me a laptop and then my mans @youngprophetyuh mailed me a mic all the way from Boston for free... those are my brothers yo fr. Anyways I just started grinding for like a year and ended up w like 30/40+ tracks including collabs. I started hitting up local spots and being active online and just trying new shit in my music so it’s all been for the most part working out well.

Jab: I see a lot of your tweets and can't help but notice the negativity. Not that I don't sometimes embrace negativity because I do, but why is nihilism so alive in you,  where do you feel that comes from? And do you feel that your music is a direct reflection of how you view life, and yourself?

Heretic: If I may be real for a sec man, in the last year I have come up from so much that kept me back, abusive father, family falling apart, living on my own barely keeping afloat, mad mental illnesses that haunt me daily man. I rap, so my own promo and PR and book myself. Everything is in house and it takes a fucking toll man. All this plus working full time, trying to keep my wonderful beautiful girlfriend happy cuz she deserves all my profits if I make it. I’m mad insecure ion have a good relationship w my pops idk man it’s a lot of shit going on in Heretic’s Head.

Heretic: That is a staple of hip hop, rap whatever it is. Sampling music to create a soundscape Man. And now people are using metal and punk and grunge and I fucking love it. This is our generations shit, black or white u know ur lame ass got down to some blink when that shit came on the radio.

Jab: Some people want "traditional" hip-hop with substance, some want trap, some like "mumble" rap, some like "punk" rap, then there are those who like cloud druggy rap, alternative, experimental, etc. The culture is kind of torn right now when agreeing on what "real Hip-Hop" is, are you satisfied with the state of Hip-Hop right now? Just given the sounds, how anybody can create, and the flexin/drug scene.

Heretic: So hip hop is mad subjective. You have so many different genres in hip hop and rap music now that it’s a weird time to be in it. I wouldn’t say a lot of it is real hip hop, but that doesn’t mean it isn’t good and that it doesn’t speak to people. To answer the question I am cuz I love when music changes.

Jab: Who are some of your favorite all-time favorite artists, in and outside of Hip-Hop?

Heretic: I mean really most of these underground heavy hitters I’m cool w. I look up to them tbh and they just over look me it’s okay I’m sipping tea. Lmao no System of a Down, ghostemane, suicideboys, my mans @youngprophetyuh  @oniincteam @OfficialJayzUp @TRAINWRECKPAPI ALL FYE but idk old school is like pharcyde n fugees lauryn especially.

Jab: I see you have merch coming, and have a show in Vegas coming, right? What else is next for you as an artist?

Heretic: Yep we are dropping the limited and unfortunately sold out RED season drop but hopefully we will have something for Vegas that’ll stick around for future drops. And yeah man I’m opening for @oniincteam at the Beaty Bar on the 13th of May!  I have my first full length project called “I’msorry” I have a second one in the works some new shit w my group ZEALOT$ more merch w my brand EDGELORD And u know just get shows n blow up before I off myself... kidding

Jab: Dope, thank you for taking the time to do this. Anybody you wanna S/O before we wrap up?