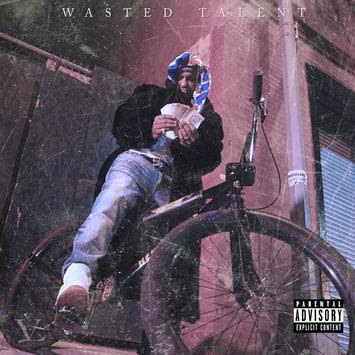 The days of 20 track albums interrupted by four or five skits and interludes are long dead. In fact, they died sometime around the time of Jim Jone's peak of success. However, on Wasted Talent Jones flirts with bringing back the abandoned format, stewing up an 18 track LP threaded with audio clips from A Bronx Tale throughout almost every other track. The choice of movie is fitting; the themes of coming of age and turning wrongs into rights parallel that of the album (not to mention it seemingly inspired the title). The Harlem rapper makes it feel like his situation was not too far off from that of 'C', the movie's protagonist.

Jim Jones finds himself turning into a mentoring old head for a lot of young rappers as he approaches 42. The album lingers somewhere between high-energy bangers and laid back, sample driven tracks. This on-the-fence style sort of sums up Jim Jones' entire catalogue and persona as an artist. At times its difficult to tell if you like hype Jim Jones better than mellow, cruising in the whip Jim Jones. Nonetheless, love him or hate him, he always has something to say and he does a damn good job at saying it. That proves true again on Wasted Talent. The album leads him to reflecting on his influence on gang culture in rap, his times as a youth, and the pressure he endured from those around him. While at times on the project it becomes tough to tell if Jones is huffing and puffing to keep up with the times or adapting well, he refuses to sacrifice his sharpness as an emcee and his abilities to keep interest with his bars. That's not to say there aren't plenty tracks where he sounds perfectly in place. There is a lot to take away if you listen to his points he gets across--themes of growing older, learning lessons, and simply becoming a better person. Whether you choose to subscribe to the fact that he has actually done so is up to you, but at face value the album tells you he has.

Jim Jones will eternally be the epitome of a real New Yorker, all bling and star power aside he is the caricature of the proud man you see on the subway or at the bodega who wears his heart on his sleeve. On Wasted Talent that man sits you down and gives you all of the advice he can offer, while making it entertaining. Listen to Jones as he recruits Cam'ron, Juelz Santana, Mozzy, Lil Durk, and more below.