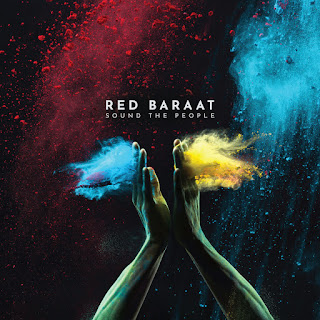 Red Baraat recruits Heems of Das Racist for "Sound the People", which strikes as a wake up call for political movement. Red Baraat brings together screaming brass and explosive percussion for an overall ballad that commands attention to itself. Heems effectively threads his staple sense of wit and colorful lyrics with an urgent need for awareness. The track serves as a single for an album of the same name, which Red Baraat is slated to release June 29th via Rhyme and Reason.

When asked about how the song came to fruition, The band's Sunny Jain told them:


"Heems and I met several years when he was still doing Das Racist. When Red Baraat started working on the new album, there were various ideas I had about South Asian diaspora, migration and Trump's disconcerting victory, but it hadn't all been tied together just yet. I shared all this with Heems and also sent him a couple of songs I had composed specifically thinking about his flow."

Hopefully the collaboration appears again on Sound the People. Preorder the album here.