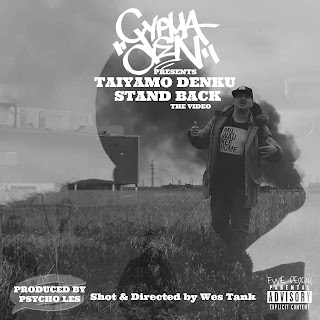 Taiyamo Denku continues setting fire to the microphone in preparation of his forthcoming album, "No Industry Standard". This time, he blazes a Psycho Les produced record, instructing bystanders to "Stand Back" while burning down everything in his pathway. The Milwaukee wordsmith transforms into the Hip Hop version of Fantastic 4's Johnny Blaze. He wastes no time whatsoever Compacting a blitzkrieg of rhymes into each bar, sometimes surpassing the margin lines. A seasoned emcee, Taiyamo spits lines like "been rhyming since before Tim Allen was Santa Clause".

To match the rhyming and production caliber of Denku and Psycho Les, video director Wes Tank takes the single to all new heights. Wes vividly captures the Cypha Den Music henchman's mindset, spinning cyphers and sparring sessions into a captivating silhouetted style presentation. Repping his hometown fully, Taiyamo rocks a Milwaukee shirt while shooting the video in undisclosed locations on the northside of the city. 0 to 100 MMA Gym and others add the finishing touches on this classically served Hip Hop release.

"Stand Back" as well as the Conway The Machine featured "Be Who You Are" will be found on the "No Industry Standard" album. Along with that, expect to hear amazing guest features from Lil Kim, Chino XL, KRS One and more. The album is set to release this upcoming June.