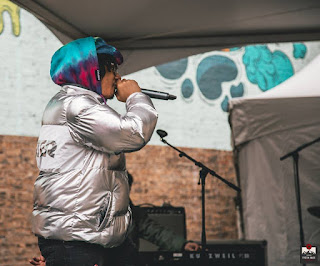 Musa Reems has quickly become one of the best upcoming MC's in the Chicago Hip-Hop scene. In this interview we listen as he goes in-depth on Chicago, his influences, new music, and more!


OK-Tho:  So, If I'm not mistaken you're not exactly from Chicago but you're located close to the area. Can you tell me a little about what Chicago is like, and what the city and it's Hip-Hop scene means to you?

Musa Reems - Correct. I'm from one of the west suburbs that we call “Woodside” which is about 15 minutes away from the city. But, I was born in Chicago and spent a lot of time on the west side in the Austin neighborhood.  Chicago is a big city, that has a little town feel. It’s a lot of culture, different people, food, dialect, art, transportation, architecture, and influence. Being in the middle of the country allows us to be inspired by all parts of the spectrum, but at the same time we create our own world filled with intricacies that makes Chicago feel like home. The Hip-Hop scene had an exponential impact on my life. I feel like the amount of time I spent in Chicago while growing up had a great impact on my life. The Hip-Hop scene exudes open-mindedness, rich, unique styles, and a take on reality that I think is extremely important in Hip-Hop today.

OK-Tho: What artists have influenced you as an artist, especially those from Chicago?

Musa Reems - I grew up listening to a wide range of artists. Hip-Hop artists such as MF DOOM, Sean Price, J.Dilla, 9th Wonder, Pharcyde, Black Thought, OutKast, and Mobb Deep were dope to me.  A lot of people in Chicago introduced me to East Coast Hip-Hop growing up, so I mostly listened to that, but as I got older I broadened my horizons to other regions. My Pops has an extensive collection of music also. I listened to Al Green, The Ohio Players, Jamiroquai, Prince, Sade, Donna Summer, Anita Baker, Roy Ayers, John and Alice Coltrane, and even more talented musicians. In terms of Chicago, I’m influenced by a lot of people. Chaka Khan, Minnie Riperton, Lalah Hathaway, and Frankie Knuckles are a group of Chicagoans that have inspired me outside of Hip-Hop. In terms of Hip-Hip in Chicago, artists such as Common, Do or Die, Twista, Da Brat, DJ Rashad, Add-2, and No I.D. helped me form my own style.

OK-Tho: Is there anything outside of music that moved you to become an artist? Like maybe a cause, the culture itself, someone you care about?

Musa Reems - Yes, all of that - the cause, the culture, and someone I care about. In terms of the cause, I made a transition from playing sports to art. Both of these arenas allow you to use a platform to stand for something and make a change in society. I guess I gravitated to music a little bit more because those messages you believe in you can put into lyrics, visual, design, and more. I saw how people I looked up to musically changed my mindset and affected my thinking, simply with the things they were talking about in their music and their actions. After coming to that realization I wanted to do the same thing and have an impact on as many people as I possibly can. I also saw how comedy and satire helped me learn and there is wit/punchlines/lyricism in Hip-Hop that are similar to those skills. The culture played a huge role in me gravitating to rap. I used to want be just like Big Daddy Kane when I was younger. His rhyme schemes, flows, and punchlines caught my attention at first. His style was so raw to me. The chains, rings, fits, high-top fade, and his ability to have stage presence while dancing and rhyming were something I had never seen. He definitely helped me form my identity and the four pillars of Hip-Hop(deejaying, emceeing, breaking, and graffiti) definitely did too, especially in a big city. There are two people that I was close to that pushed me towards making music, my Pops and my grade school teacher, Mr. Konny. My Pops would play all types of music at the highest volume in our house. He exposed me to a lot of different artists and culture. There’s one moment that pushed me to rap. He gave me “Ready To Die” and told me to make sure that I listened from front to back. I learned how to rap and make an album because of that moment. Mr. Konny was my eclectic 8th grade teacher who introduced me to MF DOOM. This made me get really technical about my art and get into production also.

OK-Tho: Where and how did you get your start as an MC?

Musa Reems - I got my start as an MC in Chicago with some of my best friends growing up. We formed a group named “Children of I.L.L.I.O.S.” and did a lot of things locally. We garnered a decent amount of attention from blogs in Chicago and put out an EP titled “BETA GENES!S”. We were just a bunch of nerds in terms of rap culture. We studied a lot of the work that people before us created and applied what we learned into our own life. During that time, I started rapping and we made beats on FL Studio. I began my solo career in 2016 and released a two-song project titled “Another Dos(e)”.

OK-Tho: How do you feel about the current state that Hip-Hop is in given the glamorization of drug use in music, old and young rappers dying left and right, etc.

Musa Reems - It can become scary to see people in Hip-Hop passing at a young age, due to glamorization. It hits close to home, especially when the artists are relatable. It’s unfortunate that certain situations happen like this and seeing people you look up to not be here is saddening. I try not to take things for granted, wish people the best, and be supportive so that we all can progress in the right direction.

OK-Tho: What's the Hip-Hop scene like in your city?
Musa Reems - The Hip-Hop scene currently in Chicago is very progressive and active. There are a lot of different acts and sounds coming out of the city at one time. It really inspires me because I feel like you can try anything in Chicago. Things like House and Drill are completely different, but exist in the same place. I think that’s the beautiful thing about the Hip-Hop scene also. Hip-Hop gathers influence from so many genres, so we apply all of the ideas in those musical landscapes to our own.

Musa Reems - Chicago hip hop has a huge influence on me. Growing up listening to the older generation of rappers from here, helped me create my sound. Common, Twista, and Lupe definitely have the biggest influence on me because of their content, production choices, flows, and what they represent. The newer wave affected me in a different way. Being able to see the rise of artists like Saba or Noname related to me the most because I was able to see their shows, hear their first projects, and see the continuous growth of their careers first hand. Chicago is a close-knit city. I remember seeing some acts open up for bigger acts but now their doing their own headlining national/world tours. I think that’s why Chicago’s influence has had a strong effect on me. I can go to venues or spaces and I know top tier talent will be there and I have the same opportunity as the people who have come before me to have the same results. I saw a lot of hard work from these artists so they influence me to have a strong work ethic and be relentless with the honing process of my craft. 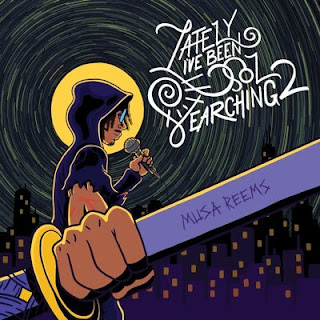 OK-Tho: I notice that your Lately I've Been Sol Searching 2 cover has a late night, almost samurai under the moon type of vibe. Was anime an influence in the cover, and is anime something you you're a fan of?
Musa Reems - Anime and comics played a huge role in the cover. The two particular ones that gave CrystalFace and I the most inspiration was Afro Samurai and Samurai Champloo. I’m a big fan of both. The production that Curbside Jones and S.K.I.L. provided help when we came up with the concept too. Shoutout to CrystalFace for bringing that to life. I love anime/manga/comics because it creates a lot of storylines with relatable characters. I think that’s why it’s cherished in Hip-Hop also. It’s another form of art where a creative can create a narrative and connect with people. I also enjoy anime because some of my favorite producers provided music for them. I started off rapping over a lot of Nujabes, Force of Nature, and Fat Jon beats. It helped me be versatile with my rhyming and I was open to new sounds.
OK-Tho: What can we be expecting from you in the future? Another project? New single? Features/Collabs?

Musa Reems - I’m currently working on another project. It’s about 70% done. A lot of diverse sounds and different things that listeners haven’t heard from me yet. It’s titled “To Whom It May Concern”. I also have another collab EP that’s finished with some heavy-hitting emcees in the city. The production on the collab EP is handled by one producer also. I’m hella excited about it so be on the lookout. I’ll be dropping more visuals and loosie singles within the next few months also. I’m having a lot of fun while creating.
Chicago hip hop Chicago hip-hop Chicago rap Interviews Main Featured musa reems
Reactions: