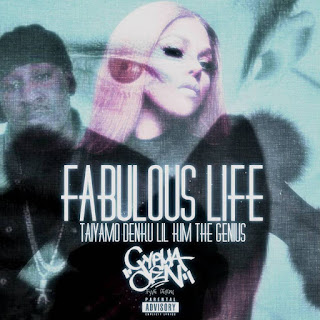 When it comes to speaking about life, we all have our own personal views of what success truly means. Some would say it's all about vast amounts of money while others would describe health, happiness and family. Whatever the case may be one thing is for sure, we all strive to lead a "Fabulous Life". Milwaukee based emcee Taiyamo Denku digs deep into this topic alongside Boston R&B vocalist The Genius and the notorious Queen Bee herself, Lil Kim.


Produced by Australian beatsmith, Dcypha, the Miami Vice sounding keys and crisp drums perfectly match the trio's verbal approach. Kim Jones delivers a verse that would make a young Lil Kim extremely proud. She even makes a reference to the revealing outfit she wore back in 1999 at the MTV VMAs. The Brooklyn femcee is still living fabulously with high end designer threads and her promiscuous word play.

Taiyamo approaches the track in two different ways. In his first verse, he rhymes about how money doesn't truly determine your social status. Denku is a hard working artist with hundreds of songs in the vault, some of which carry features from some of Hip Hop's biggest legends. He tours relentlessly and handles alot of his own promo. He lightly mentions these things in the song but it's his responsibilities as a father and as a true emcee of the culture that he values the most. His next verse finds Taiyamo in a reminiscent state of mind as he looks back at his accolades and finds true happiness in knowing he's had a long lived music career, albeit the vast amount of dollars.

"Fabulous Life" is the last single to be released from Denku's forthcoming album, "No Industry Standard". Previous singles included the lead off single featuring Conway The Machine titled "Be Who You Are" and the Psycho Lez produced "Stand Back". The album will also feature Chino XL, KRS One, Benny The Butcher and more. The album is currently available for pre-order on Bandcamp.