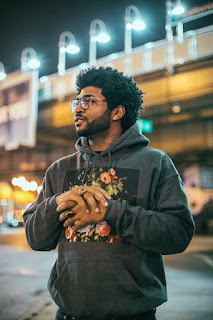 In early 2017, I interviewed prominent Chicago DJ and beatmaker Fess Grandiose about his first instrumental album and a monthly beat showcase called Open Beats. He invited me to his Logan Square apartment, where we drank a couple beers and talked about music for a couple of hours. As I sat in his home studio, located in the front room of his apartment, it was clear this was a special room. As Fess explained to me, the front room served as his musical sanctuary. Packed wall to wall with DJ equipment, mixers and records, it is a gearhead and music enthusiasts wet dream. That front room serves as the main inspiration for his second instrumental LP, Front Room Methodology, released on Chicago-based label ETC Records. Fess tests out a lot of different sounds and vibes on Front Room. “Here For You” is your classic chill lo-fi hip-hop instrumental, and just a couple of cuts later he gives you some G-Funk meets Madlib flavor on “Escape to LA.” While “Bang…” sounds like The Doors, with a nice Q-Tip-esque percussion on the outro. Fess saves the best for last on his finale cut, “Kimball House.” He blends eerie synths with house drums that gives you something to either nod or dance to. Fess Grandiose still hosts Open Beats, a monthly open mic night for beat makers and instrumental artists at Logan Square’s Cafe Mustache. He also regularly DJs at popular Chicago clubs, including East Room and The Owl. Photo Credit: Katie Lavine
Chicago Chicago hip-hop Fess Grandiose hip hop instrumentals Instrumentals