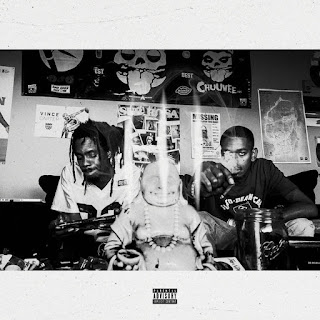 West Coast duo Chuuwee & Trizz return with the 3rd installment of the “AmeriKKa’s Most Blunted” album series. Spanning over 4 years and gathering over 25 million streams across the whole series, the duo brings a new, updated sound to the newest addition to the AMB trilogy.
Their previous two AMB albums and two EPs have racked up millions on millions of streams on Spotify alone. Not only that, but they have definitely kept in moving in their solo careers, too, which only helps cement Chuuwee and Trizz's status as two of the West's best artists right now.
The 12 track album includes production by Money Montage, Chris Rose, Coopatroop, Humbeats, Stone’s Neighbor, Nate Curry, Nabeyin, El Blue, Jgee, JayOh6ix and Ghost.
Chuuwee says “I greatly appreciate everyone who has supported this series into its 3rd installment. AMB started out as just a collaboration and now it’s a brand and a growing piece of California music culture,” Trizz also adds “And we still the most blunted... after the 3rd one. Shout out to all the diehard fans who been down since day one. We built this organically and couldn’t have gotten it done without y’all!”
"AmeriKKa’s Most Blunted 3" is available now on all digital platforms and CD via Below System Records.