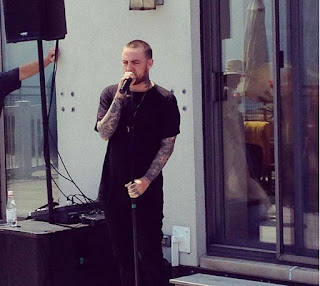 It took me a couple years to buy into Mac Miller.

When he first came on the scene, it was difficult to distinguish him from an ugly trend of rappers that appealed to mostly white college markets. However, the Pittsburgh native’s ascent from frat-friendly rapper to genre-bending auteur was well-documented, even prior to his tragic death on Sept. 7, 2018.

Even early on, there was something different about Mac Miller. I first took notice when someone pointed out that his hit “Donald Trump” flipped a deep cut off of Sufjan Stevens’ Age of Adz album. Also his affinity and respect for hip-hop became more and more apparent, the more I paid attention.

While Blue Slide Park was mostly unremarkable (though not as terrible as the 1.0 rating Pitchfork infamously deemed), the De La Soul-referencing “Of The Soul” further convinced me this was a young rapper capable of more than a soundtrack to a Saturday night house party.

Starting with Macadelic, released in March 2012, Miller progressed as a musician with each release. That July, I impulsively got tickets to his co-headlining Under the Influence tour with Wiz Khalifa. Though I was there mostly for pre-good kid, mAAd city Kendrick Lamar and ScHoolboy Q, I remember being pleasantly surprised with Mac Miller’s live show.

There was something different about him. He wasn’t the same kid from the “Donald Trump” video – his arms heavily tattooed, and he carried himself with a more mature demeanor.

#macmiller put on a pretty cool show but it was sort of ruined by a pretty big fight that took place right in front me.

From that point on, I would become more and more interested in Mac’s career. I fell in love with his sophomore LP, Watching Movies with the Sound Off, in the summer 2013. He continued to win over my support with Faces and GO:OD AM.

But it wasn’t until Lollapalooza weekend 2016 that I fully bought into Mac Miller as one of the generation’s most dynamic artists.

At the time, I wrote for a website that published online content for the Chicago Sun-Times. My boss received an invite to an event where Mac Miller would be revealing a new music, which he passed along to me.

I wrote about the event, but I wasn’t able to publish it because of an embargo. My initial plan was to publish it when the album released, but it didn’t feel as relevant so it just sat in my Google Docs folder until now.

The Divine Feminine wound up being one of my favorite albums of 2016. (I ranked it just behind A Tribe Called Quest’s seminal comeback LP). Swimming was equally as great, with a darker tone that feels even heavier with his passing.

I’ll always remember that sunny July afternoon, in which I got to listen to Feminine while watching Mac anxiously sitting on the ground with dozens of eyes on him, as his most vulnerable piece of music is being played for the first time.

I sort of regret not shaking his hand and speaking with him briefly. I had an opportunity as he walked out into the patio, I was one of the first to notice him making a lowkey entrance. I decided not to hover him because I figured he probably would want some space. I gave him a nod of appreciation and he nodded back; maybe that was enough.

#MacMiller shared his new album with us yesterday at a rooftop party overlooking #lollapalooza. #thedivinefeminine is his most personal and focused effort yet.

It’s Lollapalooza weekend, and Mac Miller is among the busiest people in Chicago. It’s only Saturday and Miller has already performed at the Chicago-based music festival, performed at an after party, announced his fourth album and released a new single. Today he’s going to share his freshly announced second major label record, The Divine Feminine, at an intimate listening event coordinated by Google Play and his record label, Warner Bros.

“Warner Brothers pretty much lets me do whatever I want,” Miller tells the crowd of a few dozen people on the rooftop of a high-rise in Chicago’s South Loop neighborhood overlooking the 25th anniversary of Lollapalooza. And as soon as Miller hits play on his new, ambitious record, it’s clear he wasn’t joking.

The Divine Feminine is a concise 10-track album, with features from Anderson. Paak, Kendrick Lamar, Robert Glasper, Cee-Lo and others. “I finally learned how to make an album with only 10 songs,” he jokes to the crowd before he unveils the project, which is his most personal yet. Despite it coming only 12 months after his first LP on Warner Bros., GO:OD AM, the Pittsburgh emcee says he’s spent more time on this album than any of his previous projects.

As the record is being played, Miller is sitting in the middle of the rooftop, with his back to the crowd, facing the speakers. He is mostly subdued as he nods along to the genre-blending album. Unlike Kanye West’s massive listening party for his The Life of Pablo album – which showed the rapper and his collaborators turning up and celebrating the new project – Miller looks pensive and anxious while listening along to his vulnerable and personal album. He’s wearing all black, while the sun beams down on him chain smoking cigarettes while mouthing his words and occasionally playing air guitar.

There is no tracklisting, no sharing of guest features or production credits (other than what was previously announced), not even stopping in between songs. Miller hits play and lets his music speak for itself.

The Divine Feminine is another drastic change for Mac Miller. Production feels heavily influenced by Kendrick Lamar’s To Pimp a Butterfly and Anderson. Paak’s Malibu. The album starts off with a piano-heavy track, which features Miller singing and rapping over drum-less production. It is a nice preview of what’s to come – a lot of singing from Miller (similar to style his 2013 track “Youforia” off of Watching Movies With the Sound Off) and a lot intimate details about his relationship with his longtime girlfriend. The funky lead single “Dang!” (which is aided by Paak) is the perfect follow up to the low key opening track and is one of many songs that have a warm, summery groove.

Off of a single listen, The Divine Feminine feels like Miller’s most focused release yet. It’s occasionally lovey dovey (“Will you just stay a little while bae” he sings on the R&B-flavored third track), but never to the point of corniness. The fourth track dips into TPAB territory, with female moaning and horns and has Miller weaving in and out of the beat with some impressive flows. He doesn’t rap as much on Feminine as he did on previous records, but when he does, it’s some of the sharpest of his career.

The Divine Feminine is a very groove-based record. There are no bangers like “In the Bag” or “Cut the Check” from his previous album. It’s a bouncy head-nodder that is perfect for the late summer. But it also gets heavier in some spots, as he details the highs and lows of being in love. Feminine concludes with a touching monologue from his grandmother. “She’s tight,” he quipped after playing the new record.

Earlier in 2016, he celebrated the five-year anniversary of his breakthrough mixtape, Best Day Ever. After hearing The Divine Feminine, it’s impressive how much Mac Miller has grown as a rapper and musician in only five years.
mac miller mac miller death
Reactions: