Me’Chelle finds empowerment through her vulnerability 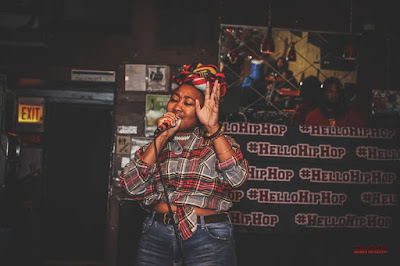 Chicago rapper Me’Chelle has a captivating allure about her. Her live show is as captivating as any in the Chicago hip-hop scene, and she has the charm and stage presence of a star in the making.

The South Side native, who also works as a poetry teacher, released her third project, NegroHeart 2, last June. On the 5-song EP, she taps into her biggest strengths as a rapper and writer: her fearless vulnerability.

Stand-out cut “Dizzy,” which features an excellent hook from Zen Wavy, is a prime example of her roller coaster loves. She talks about the excitement of a new relationship, which she is also skeptical about. “People are temporary, I save nonames in my Telefone,” she raps on the track.

“The biggest difference is my perspective,” she said about her growth as an artist. “Going from almost bitter to being brave and thinking of love in a positive light again.”

Another example of her evolution as an artist is her continued work with her backing band, The Crystal Stones. She’s been performing with the band for more than two years, and they contributed production to the EP’s excellent finale cut, “These Thoughts.”

“We played a charity event at the hideout together,” she said about the origin of The Crystal Stones. “Fell in love. Now we're married (laughs).”

NH2 also shows Me’Chelle’s growing comfort with her singing voice. While she admits she’s not the strongest vocalist, her endearing singing performances on songs such as “These Thoughts” and “Art Form” adds another element of emotional vulnerability to her music.

“I love singing,” she said. “Even though I'm no Jill Scott, I've always wanted to and I get hyped up a lot to sing. So I said fuck it (laughs).”