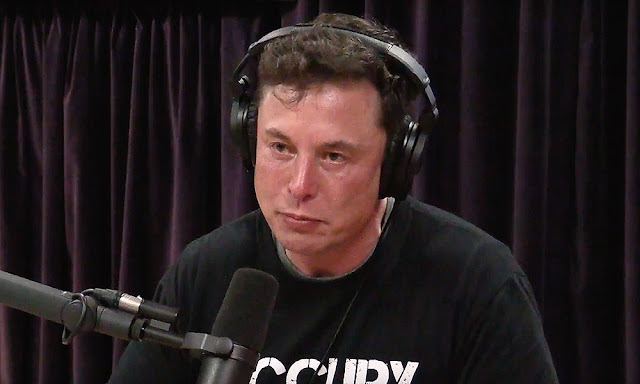 Joe Rogan has been able to elevate his podcast to top tier since its inception in 2009. It is a one-stop shop for autobiographical insight and entertaining conversations from public figures. No episode of The Joe Rogan Experience has gotten as much traffic as his most recent. Elon Musk, CEO of Tesla, Nueralink, and SpaceX, sat down with Rogan for a terribly douchey 2 and a half hour podcast.

I will preface this by saying that out of the platforms with enough pull to have Musk as a guest, Joe Rogan was probably the best fit. I find him to be a terrific interviewer. He has his brief moments of gushing or losing focus just like anybody else, but he is good at building rapport and his show typically remains gimmick free. I also speak on the interview from the point of a shareholder of Tesla with it being a healthy but modest percentage of my portfolio. Without getting too involved, there are changes necessary to our society's lifestyle behaviors that I think his modes of engineering will greatly challenge, but there are some off-the-field things that he needs to figure out first, namely his persona as executive officer.

The interview opens up and his demeanor seems very blank. It is as if he just woke up from an ice chamber and is still gauging his surroundings. Minutes into the podcast and his ego reeks its way through the pinholes of my speakers. The way he undersells everything he says while still being self-inflated is almost impressive. It is not fair to comment on someone's accent, but it phases in and out inconsistently enough to drive a linguistic to drink. His sentences snarl out of his mouth like an offspring of Rod Serling and Sean Connery, except with more intense pauses in between. He constantly peppers words like "indeed", "vastly", and "precisely" into his dialect to convince stoned 16 year olds that he is the second coming of Confucius. There is an "I am an adult who makes fucking awesome toys with all of my money" attitude that filters every thing he says, and every facial expression he makes. 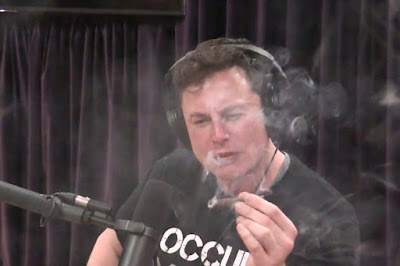 Musk's liking to being blunt and frank about everything is another personality trait that dominates the podcast. Never have I heard someone promote optimistic mentalities while sounding so glum, something he probably thinks is so cool and ironic of him. Between the one word answers, dramatic pauses, being unimpressed or better yet acting familiar with Rogan's 1500's samurai sword, Musk's presence is downright douchey. At one point he takes the time to say

"The universe as we know it will dissipate into a cold mist of nothingness".


And who could forget:

"We have a giant thermonuclear reactor in the sky called, The Sun...It's great. It shows up every day."


Cue fedora tilt as a sign of respect from epic internet prowlers. The things he says and the way he does so just rub the wrong way. He also carries himself as a whistleblower who warned against the end of the Earth, whether it be from overconsumption or artificial intelligence - as if everyone on Earth was partying, smashing light bulbs and burning trash, laughing off a defeated Musk who stood waving his arms, warning us all of the problems ahead. In the podcast, he recites his warnings while staring into nothingness, probably thinking about simulations.

As I mentioned, there is a lot of credit due for his forward thinking. There are inevitable complications around the corner for our Earth and the way that we manage our ecosystems, and Musk is doing things that have the potential to prevent, or at least delay them. Still, every year it grows more and more present that while he should retain his position as engineer and product architect of the company, he should fork over the title of CEO. There have been high profile exits from other executives within the company, lost promises of targeted stock prices (not to mention the illegal means of communicating it to shareholders i.e. twitter), as well as some issues with his line of products. The smoking on camera issue has been exhausted enough to gloss over, not to mention I don't find it bothersome. There has simply been an overwhelming conglomerate of bad looks for Musk and his priority company. Unfortunately, his latest appearance on The Joe Rogan Experience salted the wound for shareholders everywhere.

Watch the full podcast below.