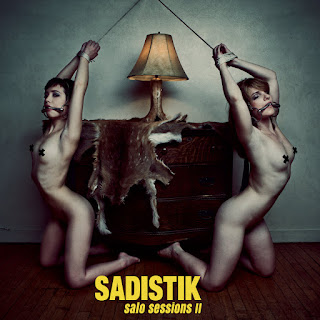 I've been a supporter of Underground Alternative Hip-Hop Artist Sadistik since he dropped Phantom Limbs in 2015 with Kno of CunninLynguists, Since then I've heard and reviewed Salo Sessions (EP) in 2016, his 2017 album Altars (one of my 5 favorite albums of the year) and now I'm here and glad to review the second installment of the Salo Sessions series with Salo Session II.

Kerosene Dreams sets the tone for the album with the dark vibes from the beat and I got chills when Sadistik said Maybe I'm just paranoid but I see 1984, referring to the dystopian world view that is depicted in the book 1984 by George Orwell.

On the second track Yokai Sadistik is claiming to see Yokai (Supernatural monsters, spirits, and demons in Japanese folklore.) everywhere he goes. Yes, I indeed googled Yokai and I'm not ashamed of it haha. This was a banger and I got vibes of the opening track Kerosene Dreams.

Crown sees the EP take a slower pace with the peaceful vocal sample on the hook, and the at times atmospheric beat. Here Sadistik is wondering how he became so narcissistic and expresses how everything feels so artificial. He also touches on how he thinks too much which leads to him not being able to sleep, but even if he does sleep he may sleep too much which means he can't smoke, and if he does smoke it could be too much which would lead to him not being able to dream and see his deceased father.

On The Way Down featuring Trizz (S/O to Below System) both artists meshed well together and brought the same vibes the beat brought, dark. The beat kind of reminds me of a slowed down version of Kerosene Dreams' beat.

I love how dystopian and nihilistic the beat and lyrics are on Echoes ft. Deacon the Villain. Sadistik says here that all he hears is Echoes when he calls out God's name. One of my two favorite tracks on the EP.

My other favorite track on the EP is Heaven's Gate Away Team. The beats reminds me of Sacrifices off of Altars. A couple of quotables here, S/O to Genius for the lyrics:

"Yea we say it's not of our volitionThen call on God to fix it but it's fictionCrucifixion, dying off just to conquer our addictionsDyatlov pass incident lost in our own wintersThey wait in vain for a cosmic interventionAnd save the pain just to lock it in a prison


I stay awake with the monsters I've been given"


The last track Perseus (Remix) featuring Slug Christ is a hell of a banger but is a really fitting outro.

After this, I think it's safe for me to say that Sadistik will never miss with a release. This was a great EP with a mix of vibes from recent projects and what I feel could be a taste of what's to come next on future projects. I think this installment of the Salo Sessions is better than the first.