Another Set of Unexpected Hip-Hop Collabs 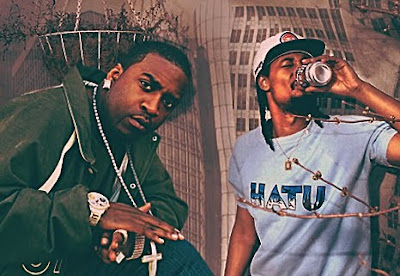 Recently I was scrolling around only to find two twitter users discussing the song "Base For Your Face"; a total heater from top to bottom. Of course what makes the track significant however, is the appeal of a 9th Wonder song featuring Phonte, Jean Grae, and ... Lil B? In a small way it tears down a wall that lingers around and holds back the progression of the genre. It also made me think of an earlier installment of unexpected collabs which can be read about here. Through some more thinking and research I was able to scrap up a couple of more curious collabs, some good and some bad.

Lil B on the same track as any of the artists on the song would have been enough to make a golden era hip-hop head b-boy their anger out on a flattened cardboard box. But, how the story goes according to 9th wonder is that Lil B reached out with enthusiasm about getting a track done, 9th respected his initiative and liking to his music, and then the rest is history. Lil B drops two impressive verses over a gem of a 9th Wonder beat that cuts up some crafty samples from Public Enemy and Lou Rawls. He was even nice enough to let Lil B keep ad-libs like "Swag" on the final cut, that is, being bold and assuming his instincts might have told him to do otherwise.

Maybe if I were more savvy to super early Danny Brown this would make more sense, but Hawaiian Snow came out pre-The Hybrid so I won't think to act like I was on him at the time. Apparently the two hit it off while discussing G-Unit possibilities for Brown, but we never got much elsefter this. In retrospect, the collab in its entirety is weird. The aura around it, the way it came about, the new and the old, it's all so interesting. The craziest part is to think that Yayo only has three years on Danny Brown.

The album is solid though. The two brought bars and their own unique oddities, satisfying the idea of the pairing. It opens with "Roll Up", a crazy track, eventually becoming better known for being flipped in Drakes "Free Smoke". Later on, Yayo weaves Avatar as well as Terrell Owens and Ochocinco into brags, effectively rubbing in how long ago 2010 was. Oh, and the inescapable Lil B is the only listed feature on the project.

I tried to avoid non hip-hop artists on the list, but this song just sucks. There's a very bizarre, cheesy, suspicious volume of white guilt coming from Brad Paisley, and LL Cool J gives a half assed attempt at reciting an overview of black struggle in one verse. He also tries to level durags and gold chains to confederate flags and slave shackles. That's not to mention that it feels like his verse comes in around the 25 minute mark after a never ending pity party from Brad Paisley who's singing and crying over drums that sound like they were downloaded off of Youtube. There is no fun in hating but this track is just flat out awkward and a waste of time.

This may not be the weirdest one on here, but it certainly serves as a surprise. The two both have strong catalogues and seem to take a liking to respecting the game, but definitely go about so in different ways. It's dope on paper, but unfortunately was one of the weaker songs on Asia's Blackbelt Theatre. The song is compromised by pretty vanilla R&B hook, and the overall composition takes away from the novelty of the duo.

The only thing these two groups have in common is a 3 letter acronym. It seems to me this song was made solely for the Dr. Doolittle 2 soundtrack that it was featured on. I think I ripped into "Accidental Racist" hard enough to let this one slide, and at the least it's not a big political vomit, but it is not good. It's closer to hot garbage. Give M.O.P. credit, or credit to the check they got, because for some reason they actually sound inspired to be on a track with LFO. It feels like some media giants were hammered and drunkenly made this happen.