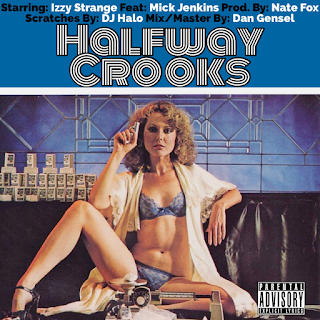 Izzy Strange unleashes a barrage of aggressive ammo aimed at anybody thinking of trying to size him up on the Mick Jenkins featured, Halfway Crooks". Over a Halloween-esque production from Grammy Award winner Nate Fox, the pair leave shook crews running, like they're supposed to.

There's no doubt that the Pennsylvania emcee has been working in overtime mode since he began delivering music from his sophomore album, "A Good Day 2 B The Bad Guy".  It's been about 2 years now since that album's first single debuted, a collab track titled "Fall Back" featuring Eligh. Since that time, Izzy has presented songs alongside artists such as Blu, Open Mick Eagle and Mick Jenkins. Strange and Mick collaborated on AGD2BTBG on the jazzy uplifting, "No One But Me", that premiered on HHDX.

On Halloween, Izzy's unleashes his "Izzy Duz It" mixtape that features the duo's second meeting, "Halfway Crooks". Let's be honest, you ought not talk the talk if you can't walk the walk. However, there are many people out there pump faking. More so, you may know one of these falsifiers. On "Halfway Crooks", Strange is in prime form as he snipes away his opponents one by one. Wordplay is extreme as Iz spits:

Izzy Strange, product placement / Where's the payment but be patient / Takes time to be the greatest / I've been studying the ancients, so I can be replacement

Mick Jenkins enters the track at the halfway mark and continues the potent alphabet massacre with lines like:

while the chain still chokes you up / don't chalk it up, to sleep / I'm woke as fuck / was out here in these streets, just broke as fuck / and dodging all police, what they on with us? / on the cusp of something great, you can't relate

Both emcees build up their deliveries as the verses play out, giving us a dual climatic experience thru audio. DJ Halo, who did the cuts for "No Commercials", also returns to put the needle of the record and close the song out and a Hip Hop purist plateau.

Mick Jenkins has a new album coming out on October 26th titled "Pieces of a Man". "Understood" is it's lead single and was produced by KAYTRANDA. Izzy's mixtape, Izzy Duz It", arrives on October 31st and will also feature Blu, Tedy Andreas, Nacho Picasso and Sara Fox. Stay tuned for both projects and definitively make sure to check out the nineties fueled "Halfway Crooks" on Spotify.