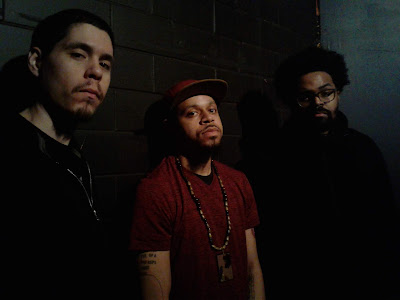 Chicago trio Jyroscope has built a reputation for bringing dense, complex lyricism over innovative production, and their latest single is no exception.

“Quasi” is the group’s second offering from their forthcoming EP, MUTE, which is expected to be released in December on ReServed Records. The song features frequent Jyro collaborator Jason Gatz and is produced by I.B. Fokuz, who also did about 80% of the EP.

The group, which consists of emcees Collasoul Structure and I.B. Fokuz and DJ Seanile, has been together since the mid-2000s and has released three projects to date: Ragtime, On the Rocks, and On The House.

“The 3 projects that we’ve released cannot amount to all that we have done in the course of those years,” I.B. Fokuz said. “A lot of our time was spent on multiple projects like Advent, Tomorrow Kings, and Collabing with other artists but this go-round....It’s time for us to truly make our mark.”

OK-Tho: What’s the story/concept behind “Quasi”?

Collasoul Structure: Folks have always tried to categorize or classify us since day one, so we kinda wanted to address that and show folks that we are unclassifiable. We LITERALLY DO IT ALL. We’re “almost this” and “sort of like that” but aren’t one specific thing in particular. The chorus is in reference to the different moves/techniques we have in our skillset. We can hit you with this or we can attack you with that and etc. It’s also us feeling the need to let folks know that we’ve been doing this for a looooong time and although we may not be as visible in the world scope as you are that doesn’t mean that we haven’t been on the grind as long and as hard as you have.

Collasoul Structure: Heavy. Whether it’s heavy subject matter or heavy bass, heavy drums, heavy synths.....You’re going to feel this project. Reminds me of when Brother Ali said “I like the snares loud enough to make your eyes blink from it”.

I.B. Fokuz: It’s us tapping back into our “raw” approach, but with a more mature, evolved foundation. “Ragtime” was a true representation of us being starving artists on the scene for the first time. On The House and On The Rocks were just a small glimpse of that evolution. MUTE is a collage of everything we’ve done but with a more polished, universal sound. So it’s raw, but more chiseled and sharpened if that makes sense. But like my Brother said it is heavy, and it is intended that way.

OK-Tho: What else can people expect from the next project?

Collasoul Structure: People can expect to hear us open up about our current lives and our background a little. We’ve never really told our story. There’s a song on there that’s dedicated to fatherhood, being a husband, being a son and just accepting all these roles as a man. It also covers the women in our lives that helped mold us to who we are (our wives, our moms and daughters).

Also, 100% original production. We didn’t sample a single thing on the EP sans Seanile’s scratches, I suppose. Every project we’ve released up to this point has been sample based or a reworking of something already done.

I.B. Fokuz: You get a more in-depth view-point from what we have been observing over the years. And like my Brother said you get a more intimate look into our lives. We’re known for many things and I think this album showcases how dynamic we really can be. But to be honest, this is just the appetizer for things to come.


OK-Tho: Two of the singles off MUTE have featured Jason Gatz so far, how involved is he with the rest of the project? Why do you like working with him so much?


Collasoul Structure: Jason produced the "MUTE" single and co-produced the last song on the EP with I.B. Other than that he’s on the chorus for "Quasi." We’ve honestly just clicked with Jason ever since the first day we met the dude. He’s pretty much our Brother. We’re tooooo much alike [laughs]. We like the same sounds and just go berserk when we’re creating something with him. It’s amazing.

I. B. Fokuz: So this project really spawned from the self-titled track “MUTE” surprisingly. He sent us the beat and we were instantly inspired. Funny enough as all producers know, when you make a beat you name it whatever comes in your mind first. And it just so happened that the track he sent us was named “Mute”. With our relationship building with him and Ash (Ashley Good of GatzandGoods) it only made sense to collaborate with them on this project.

DJ Seanile: Other than him being the homie, the energy and the connection between each other is natural and homegrown. We’re all taking advantage of being able to create together.


OK-Tho: Your last three singles seem very dense and more rap-focused than anything that was on On The House, is that an intentional shift, or more due to the production style?

Collasoul Structure: Don’t think it was fully intentional. The production definitely inspired us to go bugged out crazy with the raps though I must say, especially on “MUTE” and “Quasi.” So I guess it’s partly production style, partly intentional because I know we definitely wanted to put something out that was harder and heavier than the last releases. We did two genre mash up projects and thought that it was the perfect time to put out something original. If you love and enjoyed On The House you’ll dig and appreciate the last song on the EP. It’s a small indication of where we’re going for the follow up project too!

DJ Seanile: Sonically they are gonna gravitate toward those styles but the pocket they hit on On The House is completely different from the tracks on the MUTE EP.

OK-Tho: What was it like rapping on those heavy house style beats? What made you guys want to do a whole house project?

Collasoul Structure: Fun as hell. I can definitely say we’ve probably had more fun crafting On The House than any other project we’ve ever done. It was not only challenging to rap over beats that were over 120 bpms but we had to ultimately uphold our same high standard of art while at the same time make sure we pay homage to the legends of the genre and folks who’ve songs we chose to rework and rap over.

I.B. Fokuz: Personally, I figured the story was being made during the middle of finishing up the project. The story I speak of, is three young cats from Chicago tapping into the historical roots of House Music and re-revolutionizing the merge between Hip Hop and House. When it was first done by the likes of Fast Eddie and his peers it was so unheard of. Today, you hear many dabble into the idea of it through singles and collaborations, but no one really took it to the heights that it can truly reach in today’s climate. Why not utilize our skillset to unravel the possibilities of where we can actually contribute to that genre? I don’t think that we understood the magnitude of what we were tapping into until we started to receive responses from legends and the people. What I can say is this will definitely not be a one time thing. Expect a lot more from us experimenting with this sound.

OK-Tho: So far, it feels like the new project is more in the same style as your work with Tomorrow Kings, was this sort of done intentionally or was this something that kind of just happened by accident?

Collasoul Structure: It has a smidgen of TK sauce on it maybe [laughs]. But anything TK blessed or inspired to me is definitely slightly more aggressive and in-your-face and we didn’t really let all the way loose on MUTE.

There’s something about I.B. and I crafting a project where we feel compelled to be so conversational on each song that literally when you turn it on you realize immediately that we’re talking to you and being straight up with you every step of the way.

With Tomorrow Kings we go completely unapologetic about speaking our truth and unleash the full weirdo in us. The inherent artfulness in us is front and center for a TK joint I think. Actually you know what? Every single member of Tomorrow Kings is involved in this project in some way, so the sauce is for sure on it [laughs].

DJ Seanile: The direction of what they write is always progressive. The soundscape seemed to put them in a TK state of mind.

OK-Tho: Is “Bloodstained Persian Rugs” going to appear on the project?

Collasoul Structure: We’re probably gonna get this question a lot haha. “Bloodstained Persian Rugs” was just a joint we wanted to put out there to check the temperature, if you will. We had the beat for a little while from Ice Theory (shout out to him by the way) and just decided to go nuts over it. Super grateful for all the love that song and video is getting man. It’s a blessing. But yeah, to answer your question, nah it won’t be on there.

I.B. Fokuz: We just thought it was good to draw blood before we started the year off. It’s a good ice breaker to wake everybody up.