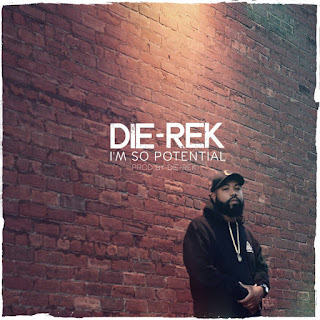 Some people recognize their potential while others need it to be pointed out to them. Not to sound morbid, but guess which place on Earth has the most potential? That place is the cemetery; because a lot of people die without actualising their capability and infinite possibilities.
Newly minted Illect representer; Die-Rek, isn't one of those people. On his latest single, the man born Derek Jordan boldly vocalizes words of affirmation and self-belief while looking toward the hills from whence cometh his help. Straight out the gate, he lands a plethora of decisive blows with bold lines such as:
"Waiting for the dreams to take flight Been puttin in work when no-one's around to make things right."
The production on this new banger is a smorgasbord of spaced-out off-kilter futuristic funk that sounds like an alien transmission from an undiscovered planet. This brand of champion sound hearkens back to the days when James Yancey and Otis Jackson first linked up. The beat knocks effortlessly but still provides a sense of intrigue with a tinge of the unexplained.
Life is short so realize your potential. Your journey starts now.
I'm So Potential is out today on Illect Recordings.
Written by Christopher Mitchell for Breaking Atoms