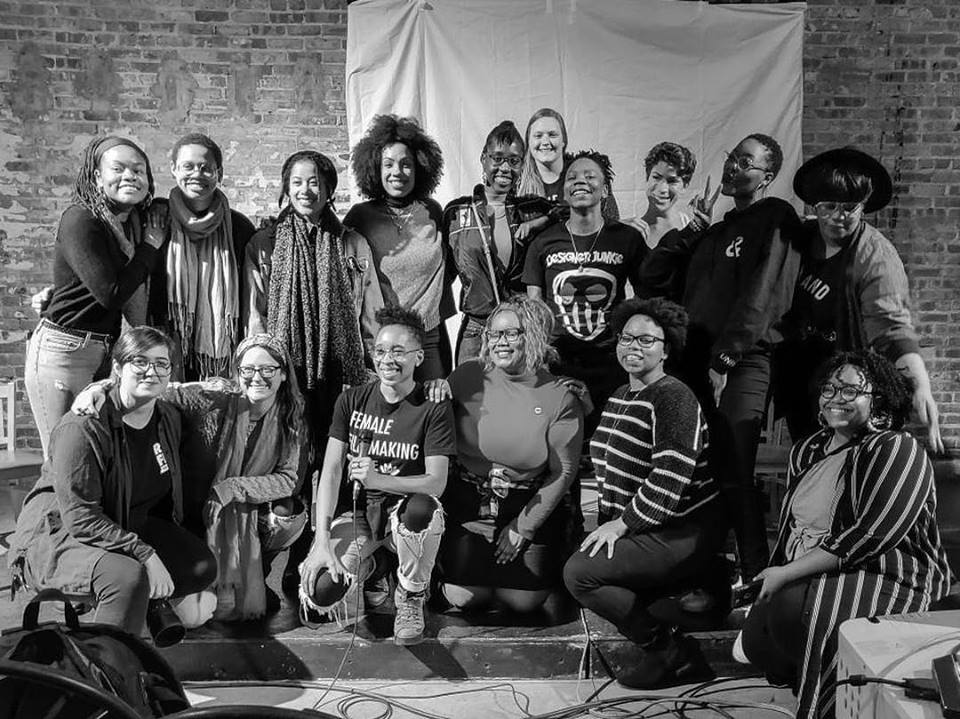 Jovan Landry is an interdisciplinary artist who has been making a name for herself as one of the sharpest emcees and most energetic performers in Chicago’s hip-hop scene.

With her next project, the rapper/producer/photographer/filmmaker is using her platform to highlight Chicago’s vast pool of talented women in every aspect of music. After winning a grant from WeWork Creator Awards, Jovan set out to create an all women hip-hop album, based in Chicago called Synergy. The project is a “multidisciplinary album that embodies collaboration amongst women in several artistic and male dominated fields.”

Jovan tapped director Briana Clearly (with cinematography by Sonia Jourdain) to shoot the video to “Synergy Cypher Pt.,” which captures three of the four elements of hip-hop: rapping, deejaying, and break dancing.

Check out the first release from the Synergy project below, along with interviews with Jovan and director Briana Clearly.

OK-Tho: You’ve been working on Synergy for a while now, how close is it to being finished?

Jovan: We have seven of the 10 tracks recorded, and it’s currently in the mixing process. We plan to release the album mid-March on all social platforms, CD, and Vinyl.

OK-Tho: You recently threw an event to debut the music video.

Jovan: Yes, the director Briana Clearly suggested that we have a preview of the music videos to get people excited for its release and get people aware of the album. The two-hour event was held at Experimental Station in the Woodlawn area (Chicago south side) on Saturday January 12. We had over 100 people come through that showed love for the project and to support their loved ones involved. It was hosted by comedian Tribble, and following the screening we had a discussion with the artists and filmmakers on their experience of working on the project and collaborating with other women and femme artists.

OK-Tho: Why did you decide to have “Synergy Cypher Pt. 1” be the first song you release from the project?

Jovan: Because there are nine artists on the album, we wanted to make sure the world gets an introduction of the first half of the artists so that they know what to expect.

OK-Tho: Why did you choose these emcees to be on this track together?

OK-Tho: What can people expect from the rest of the Synergy project?

Jovan: Aside from the singles “Synergy Part 1” and “Synergy Part 2,” each artists is paired up with another artist as they collaborate on a song of their choice, all instrumentals produced by women. Listeners can also expect interludes consisting of interludes with women in Chicago hip-hop that has been in the 20+ years.

OK-Tho: You were invited to debut the project at the Women In Hip-Hop conference at St. Louis University this past November. How did you get involved with that, and how did it go?

Jovan: Someone tagged me in a post on Facebook where the Co-Curator Dr. Amber Johnson were seeking for folks performers, and I thought it would be a great opportunity to network and spread the word out in St. Louis. It was amazing! A few of the artists and our DJ were able to come down to St. Louis and talk about the project as well as perform a set. We were shown a lot of love and support.

OK-Tho: How did you get connected with director, Briana Clearly?

Jovan: I saw Briana’s name floating around social media through another filmmaker. We connected on LinkedIn and I inboxed her and asked her if she was interested in directing both music videos for Synergy.

OK-Tho: Briana, can you give us a little background on you and your previous work?

Briana Clearly: I’m a current graduate student pursuing an MFA in Directing. I am a self-published author of a book called, Honestly: Hurting and Healing in Love and I love wigs and sneakers. Lol. My work in the last few years has really been about sharing the black women voice, whether through documentary, experimental, or narrative. That not only means in front of the camera, but behind. I also love to explore different relationship dynamics in my projects. You can see my work at www.brianaclearly.com (Is it okay to shamelessly plug? I sure hope so. Lol)

OK-Tho: What was it like working with Jovan and the rest of the Synergy crew?

Briana Clearly: It was a dream. It’s been heavy on my heart to work with an all women crew, especially one comprised of mainly Black Women, and she brought that dream to life. Everyone was so dedicated and focused, and really understood the importance of teamwork.

OK-Tho: What was the vibe you were going for with this video?

Briana Clearly: For Synergy Cypher Part One, I was really inspired by the studio videos like “Flava in Ya Ear” by Craig Mack and “Single Ladies” by Beyonce; very simple aesthetic with unique lighting setups to showcase the artists’ personalities (shout out to Candace and Kemi for the lights!) It was really about being fun and lively.

“Synergy Cypher Part Two” had a whole different feeling...like a seance, like calling on the ancestors, so I really wanted to capture that vibe visually. I think it came out so amazingly!

OK-Tho: There is a lot of iconic hip-hop imagery in this video. Why was it important for you to highlight the different elements of hip-hop in this video?

Briana Clearly: Synergy is Hip Hop. These artists are Hip Hop. I don’t even think it was something that was forced because the project(s) guided what elements would be incorporated.

OK-Tho: Each verse and artist is shot very differently in this video, how did you decide what styles you were going to use with each?

Briana Clearly: This is where the magic of collaboration (and communication) comes in. I listened to the track and got an overall mood from the artists. I expressed the vibe I was getting from each and talked with my DP, Sonia about it. She worked with our G&E crew, Candace and Kemi to bring it to life. It would not be what it was without them. They are incredibly talented at what they do and I was ecstatic at the creativity and artistry they brought to the table. The same goes for “Synergy Cypher Part Two.” It was mind blowing to see the vision come together and see these women at work. That’s the way a production should be; everyone involved should add some ingredient to make the sauce better.