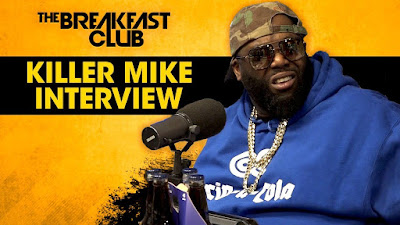 Killer Mike proudly serves as one of the most socially active personas in the hip-hop industry. His aggressive political spirit has been present throughout the entirety of his discography and other artistic ventures, and he has never shied away from a chance to speak his mind. He is a supporter of poor America—especially poor African-Americans—becoming independent entrepreneurs who do not rely on the revolving door system that cripples them the way it currently does.

A Breakfast Club interview started out in typical fashion, acting as what seemed to be a promotional run for Killer Mike and his recent ventures. He shed light on his latest line of soft drinks, Crip-a-Cola and Blood Pop, as well as his newest show Trigger Warning With Killer Mike. The point of the products was well received, as Mike was informing us on the benefits of legitimizing groups looked at as a threat to society through legal commercial business.

The temperament of the conversation got hot and loud around the 30-minute mark on. Killer Mike and DJ Envy got into an animated debate about sending their children to public or private schools. Killer Mike stood firm on the side of public education, essentially stating how growing up in poverty only to opt for private school at the chance of a brighter future is turning your back on where you came from while further perpetuating an already damaged system. DJ Envy took another stance, defending his personal reasons for sending his own kids to private schools. Killer Mike went on to say "...I'm saying to put confident children in the world."

At his most passionate he belted out


The two eventually saw eye to eye, understanding that their points weren't too out of synch with each other. That being said, Killer Mike continues to prove himself as a generational thinker, and someone you have to be ready to go toe to toe with. Watch the interview below.