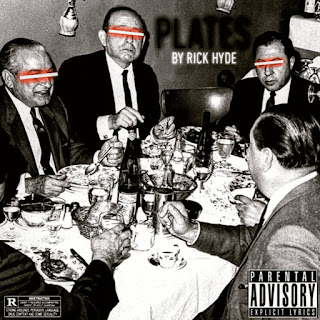 With Benny The Butcher's name on every music critics' lips right now, it's the perfect time for the Buffalo soldier to put a spotlight on his own imprint, BSF Records, and the first artist he's introducing to the world, RickHyde. While Griselda is B.E.N.N.Y.'s home, BSF (Black Soprano Family) is where he plans to promote his day-ones. Rick is The Butcher's righthand producer who has been down for more than a decade. He has had beats on recent projects like the criminally slept-on A Friend of Ours. However, he is just as nice on the microphone and he aims to make that clear on Plates.
The majority of the album is produced by Buff vet DJ Shay, who has quietly been a driving force behind the Upstate New York movement. But there is also beats from some of the illest up-n-coming boardsmen in the game like Chup the Producer, IceRocks, and Coltrane. And as for the features, Rick keeps it in the family and only invites Benny and El Camino to get down. Each show love by jumping on two songs a piece.

Plates will be released on vinyl by Dutch record label De Rap Winkel (the imprint putting out Conway's Everybody Is Food 1 + 2!!) soon. An announcement about CDs and cassettes will be made shortly as well.