I’ve had the opportunity to know, be a fan and be inspired by New Orleans hip-hop journalist, writer and curator Amanda Mester for years. Watching her come up and interview some of hip-hop’s greatest while also bringing important commentary to the table was nothing short of invigorating. Here we are a few years later and Amanda Mester is getting set to curate and host her first event in New Orleans called “A Tribute To Nas” featuring Elzhi (this Saturday February 16th) who will be performing his critically acclaimed album “Elmatic”. I finally got a chance to sit down with her and talk about her journey so far and how she got to having Elzhi perform at this event.

Ok-Tho: For those who somehow still don’t know, who is Amanda Mester?

Amanda Mester: The five-foot assassin with the roughneck business

OT: How did you get into hip-hop? And when did you take that step to decide cover hip-hop from a journalistic perspective?

AM: I had a friend in 8th grade named Kamran who listened to rap. She got me into Ludacris, Nelly...all the mainstream rappers who were on the radio in 2001. We went to see Lil Bow Wow in concert (lol). Once I started high school, I became friends with a kid named Felix who was really into Aesop Rock, El-P, Mr. Lif. Then I started dating an older guy who listened to The Roots. Once I heard Phrenology, it was a wrap; hip-hop became the predominant genre I listened to. Eventually, I copped Dwele's Subject, which features Slum Village. I discovered Dilla. And you know how that goes.

From a journalistic perspective, I guess it really started in college. I was always a writer but it wasn't until I went on a lupus walk for Dilla that I put pen to paper about some hip-hop shit. I published an article about it in my college newspaper. Then, my homie Max started a blog called Wine & Bowties and he let me write for him. I also started a magazine with some friends, called LA Raw. Covered underground Los Angeles hip-hop: Breezy Lovejoy, VerBS, shit like that.

OT: Tell me a bit about your history as a writer, because I feel like anyone who follows you on social media sees, you’ve been to a ton of shows, interview a lot of greats & more.


AM: I won a school-wide writing contest in middle school. That was the first time I can remember thinking "Oh, this is what I'm good at." Like I mentioned earlier, I really started writing in college. It wasn't until after grad school that I went full throttle on pursuing writing as a career. At the time, I was working random jobs - managing an acupuncture clinic in Midtown Manhattan, teaching Media Criticism at Adelphi University. I saw a posting for a job covering live music in New York City, for a site called AXS, so I applied. They hired me. That allowed me to grow quite a big portfolio. I interviewed Black Milk, Dwele, a bunch of artists I can't even remember. Since then, I joined Ambrosia For Heads as the third team member and first woman. I've interviewed De La Soul, Black Sheep, Bob Power, Bahamadia, Elzhi, Digable Planets, Pharoahe Monch, Mobb Deep. I've been published at Genius, DJ Booth, UGHH.com. Sometimes I don't know how I got invited into this world. What a fucking honor.

OT: I’m jumping around a lot but how did you link with Ambrosia 4 Heads and then later on OffBeat Magazine?

AM: Ha. I just tweeted AFH one day. I had been following them since the early days and was sitting at one of my soul-sucking office jobs and reading an article they posted. I said to myself, "Man, fuck this shit." Got up from my desk, went home, and sent a tweet asking if they accepted contributors. I wrote long-form pieces for a few months and then my life changed. I got asked to join the staff. Ambrosia For Heads saved my life in a lot of ways; I was feeling lost and frustrated. I'm gonna stop typing about this 'cause I'll cry. But yeah, that's my family.

As far as OffBeat, that was almost a fluke. Before I moved to New Orleans, my friend Kevin mentioned to me that OffBeat was a music magazine based here, and I should reach out to them. So I did. Turns out, the managing editor is a huge classical music fan and knows my dad's work (he's a conductor). Anyway, in 2016 I moved to NOLA and wrote a couple of pieces for the magazine, but then we lost touch and I got busy with life. One random day in the summer of 2017, I got an email from the publisher of OffBeat asking me to come in for an interview to be the digital editor, because the person in the position was leaving. I got hired on the spot and have been here ever since. I moved to New Orleans on a complete whim; I didn't know anybody, and I had the great privilege of being able to afford to move and was working from home full-time. It turned out to be the greatest fluke of my life.

OT: I can’t even front Sarah I’m asking some of these questions out of my own curiosity, how in the world do balance working for two publications and other work without losing your mind? And what tips would you give to writers who want to do what you do?

AM: LOL @ Sarah. Um...how do I balance...I guess the honest answer is I go to sleep hella early, dawg. I'm usually asleep by 9 and up at 4 or 5 am. I'm able to get a lot of work done in the early morning, when others are still asleep. I don't lose my mind because I'm doing what I was put on this planet to do, you know? I'm not saying it's easy. It's hard as fuck, and I work a lot. But keeping focused is a little easier when you're seeing your goals through. My advice to writers is to read more. Best way to become a better writer is to read more. Beyond that, publish your work for yourself, to grow a portfolio. Whether that's on Medium or whatever...showcase your writing.

OT: Talk to me a bit about New Orleans, not just in terms of hip-hop but the culture and art in general, I’ve never been and it sounds like a beautiful place.

AM: Man, how much time you got? This city is truly remarkable. Famously, it's the birthplace of jazz, which really gives me chills. The history here is singular for many reasons, but primarily due to its geography; it was considered the northernmost Caribbean city rather than a European (and then American) city. There is an insulated, vibrant, glorious culture here that simply can't be replicated elsewhere: Mardi Gras Indians, second lines, parades, bounce...I can't do it justice in words.

OT: Now I couldn’t be more proud, you have an insane show coming up this weekend, can you tell me a bit about it?

AM: I can't believe it's really happening. On February 16, I'm producing a tribute to Nas featuring some of New Orleans' most incredible musicians. The Grid Band and members of Soul Brass Band are going to do live covers of classic Nas material. The headliner is Elzhi, easily one of the greatest lyricists of all time. He's going to be performing his Illmatic tribute album,Elmatic. With a live band. Of musicians from New Orleans. It's going to be a fucking movie. It's the first Bonita Production, and I will probably cry. I'm so, truly, truly, honored that El is doing this. I don't think he knows it, but he is so special to me. 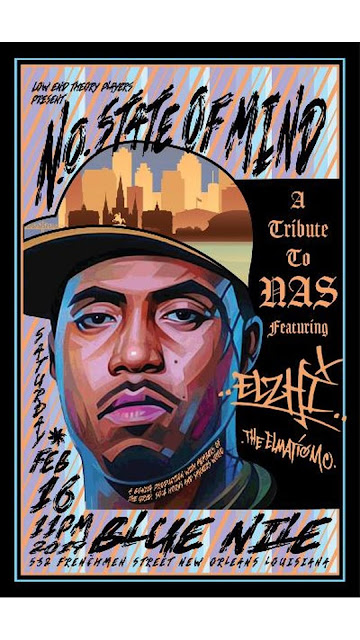 OT: How did you link up with Elzhi to make this show happen?

AM: I first interviewed him when Lead Poison was coming out. We stayed in touch and became friendly. He had a show in Houston and I drove all the way there from New Orleans to see him (what a nerd). Then, Ambrosia For Heads had a showcase at SXSW, and we had him perform (along with Kxng Crooked, Rapsody, Page Kennedy, Nick Grant...it was the best hip-hop showcase at SX that year, argue wit ya mama). This show has been 3 years in the making, honestly. Before I even moved to New Orleans I emailed his team about booking him here. It just didn't work out with his tour routing. But yeah, that's my favorite alien.

OT: Elmatic is such a fantastic album, yet I still feel like even now almost eight years later I feel like the project doesn’t give the props it deserves. What makes “Elmatic” an important album and why was it important to get Elzhi to come through for this?

AM: Whew. It's an important album, to me, because it represents that timeless quality of music. Like, we all feel a chemical reaction to certain music. Elzhi was able to take that chemical reaction he felt from Illmatic and reinvent it without it being a knock-off. Musically, it's incredible. That's largely because of the genius that is Will Sessions. To my knowledge, Elmatic was never toured in the U.S. (please don't come for my neck if I'm wrong). So, it's a big fucking deal that he's performing it in its entirety in a city that isn't his hometown of Detroit, or a major market like New York or L.A. On a personal level, the fact that he's trusting us enough to perform the album with a band he's never played with is unreal. I sound like a broken record at this point but what a fucking honor.

OT: Event planning is not easy and I can only imagine the work you and your team have had to do to put this together. Can you talk about the stress and planning that goes into making an event like this happen?

AM: Ask me again after the show's over, lol

You can find Amanda Mester on Twitter & Instagram and if you’re in New Orleans, make sure you scoop your tickets for the “Tribute To Nas” featuring Elzhi show HERE.