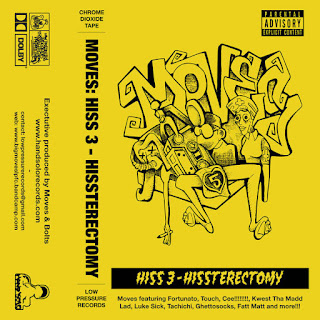 The latest from Moves is Hiss 3 - Hissterectomy, the third instalment in his signature series of production compilations named for the high end hiss distinct to cassette tapes. When the first one dropped in 1995, simply titled Hiss, it was strictly a cassette release that was only re-released on CD much later. After Hiss 2 - Hissteria was only released on CD, volume 3 revisits the original inspiration with a limited run of cassettes available through Low Pressure, along with CDs and digital through Hand’Solo. As usual, Moves brings the boom bap beat heat, and always with a unique twist that illuminates his quirky production style.

And to crush said beats, he taps the talents of underground legends Kwest the Madd Lad and Luke Sick, frequent collaborators like Birdapres, Mindbender, Fatt Matt, Tachichi and Cee!!!!!!!!, plus the awesome return of deviant “Mayor of the World” Governor Bolts! Be prepared to hear about: lots of drug and alcohol abuse, literal auto eroticism, this new thing called hip hop, odes to crew (or lack thereof!), and back to yet more drug abuse at the end. Jay O Smooth says it best closing out Side 1 of the cassette with “Fuckin’ LPFC”: “Low Pressure Fried Chicken gang tonight, east coast legends like Wu-Tang and Phife.” And that’s hella facts.