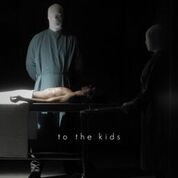 Jesse Pepe's “To The Kids That I Might Never Have,” is a biting take on the way society treats planet earth. Directed by Mateo Trujillo-Hobbs and shot in a pristine cinematic style, the opening scene is an intense reflection of how we pummel and destroy the beauty in the world around us through abuse of the land and pollution.

Pepe looks on, his internal monologue transporting him to a funeral in a breathtaking catholic church, where he seems to lay to rest Planet Earth itself to an empty congregation. Between his poetic rhymes and sharp beats, Pepe grows emotional and frustrated.


“This song really changed my outlook on the type of music artist I wanted to be moving forward: the discomfort of sharing an opinion that not everyone will agree with, being someone who challenges instead of placates. We are so thrilled with how this video came out. My team and I were really struggling to find the right story for the video, and then out of the blue my dad was like "It sounds like a funeral for the planet" and I was like "well there it is, you freaking nailed it dad, you genius!". We were off to the races from there.”
--