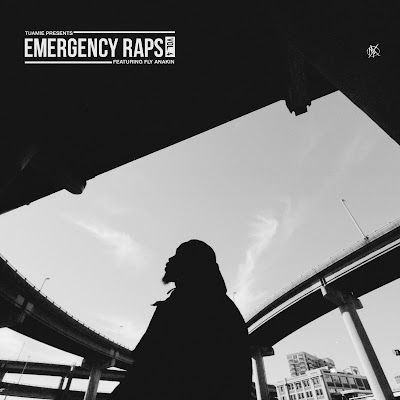 Hip-Hop is in a great place right now in my opinion, it may be easy to say “Hip-Hop Is Dead” based on what the media is covering and what your timeline looks like, but there is plenty of talent out there. Richmond, Virginia emcee Fly Anakin of Mutant Academy is one of our most prolific emcees in hip-hop right now. Releasing at least seven different projects over the last two years between collab albums & solo efforts, Anakin has more than proved himself. Last year Fly Anakin teamed up with Ohbliv to release one of my favorite albums in “Backyard Boogie”. In hindsight Anakin could take the year off, and though he’s already dropped a collaboration project with Big Kahuna Og in “Big Fly 3”, Tuamie tapped Anakin to be the featured artist in his ongoing “Emergency Raps” series.

In the fourth installment, I swear on my life that you can hear the urgency and emergency in Fly Anakin’s delivery. Tuamie’s production is on point as always, filled with samples that are guaranteed to make you feel nostalgic and open . “Emergency Raps V. 4” boasts guest appearances from Henny L.O., Big Kahuna OG, ANKHLEJOHN, Skyzoo and many others. Peep game below and expect a review on the project soon.