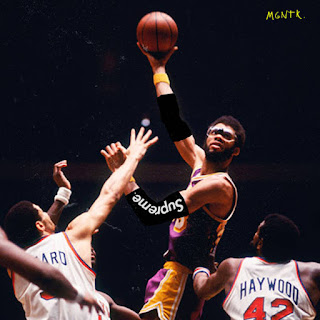 The last time this tag team dropped a project was THE PROTOCOL in 2013, which introduced to the world Baltimore's UllNevaNo with his unorthodox wordplay and rhyme patterns to match with Norfolk, Virginia residing producer Logic Marselis' Madlib influence rawness. Despite releasing a plethora of solo records throughout 2015-2018, the duo is back with their first single from their upcoming album DUSTIN GRIME.
Titled SUPREME ACCESSORIES, UllNevaNo made this record for those that appreciate dope rhymes, and fly things. This is the type of music that you drive to pretty much. The soulful sample alone sounds like it should be in a blaxploitation film. Logic Marselis provides a raw backdrop that gives UllNevaNo breathing room to provide an audio design of the most coveted street wear brands. UllNevaNo sets a tone where this record needs to be played inside of gold 1991 Lexus ES. This record is making a statement to wack rappers, that he is a different pedigree.
Record: Supreme Acessories
Produced by: Logic Marselis
Rhymes by: UllNevaNo