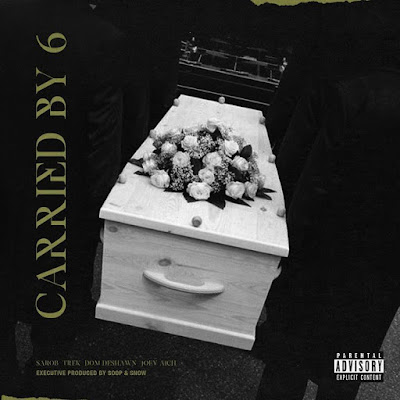 Group albums are in the minority these days and truth be told I forking hate it. There was nothing better than throwing on an entire album of talented emcees and producers come together and making incredible music. Thankfully my family from Ohio have come together as a group known as Carried By 6.

Carried By 6 is made of Trek Manifest, Dom Deshawn, Joey Aich and Sarob on the vocals with Soop & Snow on the production.

All 6 of these artists have already and are currently making footprints in hip-hop and truthfully dipping their toes in other genres too. In talking to Sarob he mentions “.....We're the first reasonably popular solo artists to come together and make a group (as opposed to originally being a group and then branching off). We're inspired by our history and hope this project takes things a step further.”

All seven tracks on this showcase the talent not just of every artist in the group, but the diversity and amount of flair that comes from Ohio. Stop sleeping on us.