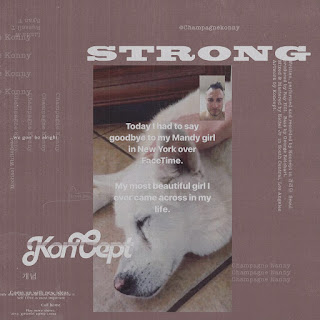 When Koncept uses the word "Strong", he is talking both physical and mental.
Being strong is having the energy to keep moving forward. It's knowing when to do something, and also when to not. It’s the strength of being able to let someone or something go.
Know when to talk, and when to not say anything at all and just listen. It's important to know how to fight, but also how to chill.
Strong is finding patience, balance and peace.
The song was recorded in Seoul, South Korea while Koncept was on tour.
Produced by Ray Hill.
The chill, but impactful vibe and lyrics dig into Koncept speaking that even while having success, laughs and fun, there are still challenges that we face along the way that we have to fight through. Some that aren't always present on the outside. He let's us know to stay positive and "we gon' be alright."