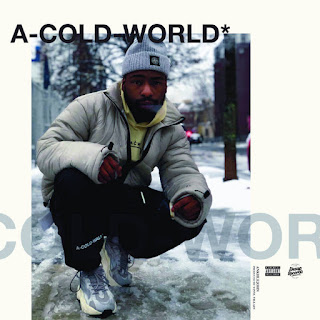 DC emcee Ankhlejohn is continually making waves with projects that feel like they come around once a month, a product of his obsessive work ethic. Ank is dialed in, and A-Cold-World* is the latest victim on his long hitlist of bodied albums. For this one he teams up with Boston's Vinyl Villain, the self-proclaimed Martin Scorsese of hip-hop. The moniker feels accurate, as the alliterative producer proved his ability to set a scene throughout the entirety of the LP.

A-Cold-World* features a chippy Anklejohn, one who expresses some convincingly justified anger and boasts through a platter of rhyme schemes and wordplay. He has always been known to have a voice that commands attention. His big mouth, big stick presence makes for an aggressive yet shrewd outcome every time. On the LP his dubs and ad-libs ring from left to right schizophrenically while his bars leave impressions like a hot brand.

The entire album sounds like it could score a murder scene of a mob movie. Vinyl Villain chops up obscure, foreign samples that create an ambience unique to his co-partner's sound, often spooky at times. While tracks like "Blood Diamonds" sound like street luxury, something like "Hitman Holla" sounds like back alleys and underhanded exchanges. Front to back A-Cold-World* is seamless. The two demonstrate great chemistry, every instrumental and nuance marries Ank's sentiment well.

Hopefully this won't be the last we see from the pairing. Support here and listen below.