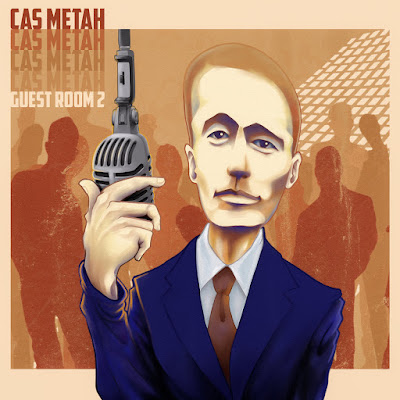 Ohio emcee and Scribbling Idiot founder Cas Metah is one of hip-hop’s most talented artists. Having performed all over the world (yes, world) Cas Metah has built a reputation of being one of the dopest around. Cas’ accolades don’t end there though, Cas is known in hip-hop as a frequent collaborator amongst his peers. Up to this point, Cas Metah has worked with greats like Cunninlynguists, Masta Ace, Theory Hazit, LMNO, Copywrite and many more. 10 years ago Cas Metah took this branding and dropped an entire album fueled by the relationships and friends he had made over the years in “Guest Room”.

Here we are in 2019 and a sequel is here in “Guest Room 2”. 18 tracks full of collaborations this is a hip-hop fans dream. No egos, just good hiphop and competitive writing within that hip-hop. The formula is the same as the previous “Guest Room”, except we have 10 years of growth and evolution to look back on. With this evolution comes more guests, Ras Kass, Sintax.the.Terrific, Ronin, Cookbook, Allen Poe, Witchdoctor, J57 and more than 20 other artists. Production features Mouf Warren, Ski Beatz, Re:Flex the Architect and others, making “Guest Room 2” a must-listen.

If you’re new to Cas Metah I strongly suggest diving into this, as you’ll walk away with 30+ artists to look into and listen to when “Guest Room 2” stops.