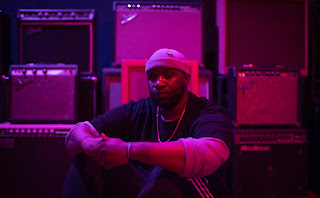 Mani has several albums under his belt including The Unauthorized Biography of Ella Mae, Last Marauder and RAWK(Mani on Spotify) and has collaborated with Jake One and Terrace Martin. Mani has composed original music for Tommy Hilfiger, Adidas and Calvin Klein, and was the narrative voice on IAMSU's Sincerely Yours album. Mani co-founded the Brave Area collective and partnered with Bay Area boutique label At The Ave Records in 2017.

Mani says his new single was "born out of a conversation centered around legacy. All of my successful creative friends (Kevin Allen specifically) are family men and women. When I was able to slow down and process that, it was inspiring to sort of recognize that the stakes are always higher for them. So they dig a little deeper and push a little further than most and ultimately spawn something impactful every time out.” Mercy is out now on At The Ave.