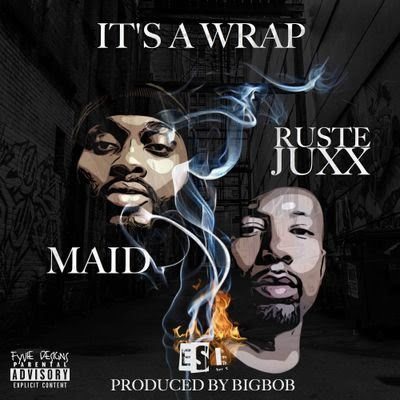 Producer BigBob provides the piano laced audio backdrop to "It's A Wrap", the explosive video from New York's own Maid featuring BCC alum, Ruste Juxx. It's a soundtrack to Maid's life which finds the barbarian handling hook duties in a lively melodic manner. A deeper meaning lies under the layers that speak about life as a black man in the Rotten Apple and the grim circumstances faced in the city that never sleeps. Ls are sparked by the emcees to help alleviate the mental pain of surviving grim street run-ins and other tight situations. With stories such as these, they became war scars of tried and true men. Watch "It's A Wrap" on YouTube below. You can find "It's A Wrap" on Maid's upcoming album titled "Third Eye Power" slated to drop on May 29th via Elite Sound International. Pre-order the project on iTunes and/or pre-save on Spotify.
BigBob It's A Wrap Maid ruste juxx