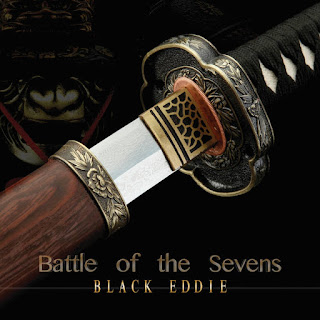 Black Eddie aka Rashaad The God, birth name Rashaad Trapp, hails from Columbus, Indiana. The self-proclaimed Part Time Emcee/Hip Hop Hobbyist is a fan first and an emcee far second. Born in the 70’s, raised in the 80’s, and reps the golden era of the 90’s. With Virginia roots through his parents, he gained his proud to be pro blackness by watching shows like The Cosby Show and A Different World.

His true school rhyme style reflects him as a whole; single father, wrestling coach, and career focused. His latest efforts is just a re-release of something he put out previously in 2013. Wanting to give it its’ just due, he decided to release it again, adding another remix to the ensemble. “Battle Of The Sevens” is just his view on religion vs spirituality and how judging other is affecting our future, the youth. It’s not about agreeing; it’s about being open to other’s interpretation. Give it a listen.