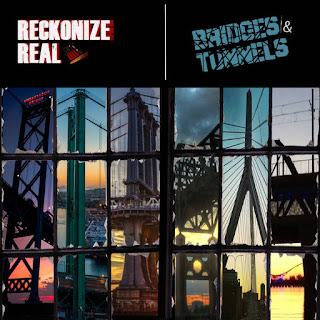 “Bridge & Tunnel” used to be a pejorative term for suburbanites that had to go over a bridge or through a tunnel to enter the big city. Nonetheless, sample artisan Reckonize Real is looking to change all that. His highly anticipated new offering Bridges & Tunnels is a concept album on which he invited a varied group of lyricists to represent their individual cities with songs about their harsh surroundings. After just one listen, “Bridge & Tunnel” is redefined as the lifelines that connect people and their experiences.


Reck built his name in the mid-2010s with producer albums that showcased the game’s finest word-wielders such as Skyzoo, Torae, Reks, King Magnetic, Median and Chaundon of the Justice League, and many more. Then in 2017 and 2018 he focused on doing full projects with two of the underground Hip-Hop’s most enduring names: Guilty Simpson and Moka Only. Those releases really established RR’s name and sound. Over the years he’s proven that he’s nice with the drums and loops, but Bridges & Tunnels is easily his most polished effort yet.


For his fifth release he assembled talent from across the country including Guilty Simpson (Detroit), Blu (Los Angeles), Rasheed Chappell (New Jersey), The Bad Seed (New York), Nowaah The Flood (Dallas), Jamal Gasol (Niagara Falls), Teek Hall (Detroit), Mayhem of EMS (Boston), Paranom (Massachusetts), Junclassic (New York), Vic Monroe (Chicago), Glad2Mecha (Arizona), and Antonia Marquee (Ohio). Each rapper gets a tailor made beat to elucidate about what transpires in the heart of their city. To get the full effect of the theme it’s best to listen all the way through, but to get a taste of what’s on the menu check out the hard reality of “No Business Like Dope Business” featuring Jamal Gasol, or the poignant social commentary of “A Treasured Hour” featuring Paranom of the Tragic Allies crew.