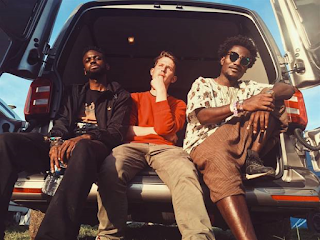 Set to release their second full-length LP, ‘Full Circle’ on Mr Bongo on September 27th 2019, London hip hop collective Jungle Brown follow up the release of their first single from the project, ‘Keep It Movin’ with a dreamy cityscape inspired music video, perfectly timed for summer.

Directed by Georgios Hartofilakidis from HumHum Productions, the visuals mirror their eclectic sound as the trio (Ric Flo, MAEAR and Tony Bones) perform across differing snapshots of London life, they even take a surreal trip up to the clouds for the choruses. The single, released in May has already gained traction at radio with spins from BBC 6 Music Lauren Laverne, BBC 1Xtra and BBC Radio 1 Benji B and Kiss Fresh Shortee Blitz – it’s also been endorsed by Loyle Carner who recently said on Twitter “Keep It Moving is my jam”.

The track flows with a Tribe Called Quest-esque vibe, adorned with a smooth sax line from UK jazz all-star, Ayo Yung Afrika Pyoneer and backing vocals from Jungle Brown’s own producer, Tony Bones – who also ties the track together with a future rap production. Lyrically it’s loosely based around moving homes and cities, but more so about the shifting of situations - from scarcity to opportunity. “Keeping it moving by any means but stay cool with it, do it in your strand and have fun with it” as Ric explains – he goes on to say:

“Keep It Movin has become a catchphrase with us which we didn't anticipate when we were writing the song. But now we’ve taken it on as our mantra moving forward!”

Jungle Brown have shared the stage with the likes of De La Soul, Ghostface Killah, Lowkey, Akala and Donaeo, and have played major festivals including Glastonbury, Boomtown and Lovebox as well as a huge number of clubs shows across the UK. They spent the last two years redefining soulful hip-hop – the sound is bigger, more thought-provoking, and it has matured with a rich soulful underpinning. They have also entered territories fans are yet to hear from them as they glide effortlessly over Tony Bones’ productions that introduce trap and house into their repertoire. The project is an eclectic array of their influences, twisted and blended together to create a ground-breaking release for UK music.

Their debut album ‘Flight 314’ boasts more than a million streams without any budget for marketing or promotion. They spent much of 2016 in Apple Music’s ‘Best of 2016’ category, featuring on various Spotify playlists and visuals on SB.TV. They were also requested to curate an exclusive playlist for Tidal and attracted attention from New York with Beats 1’s very own, Ebro.