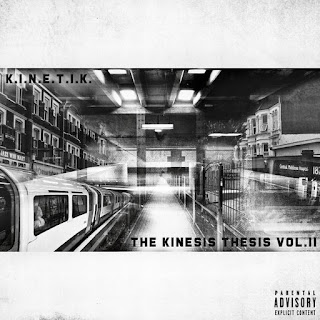 For the penultimate release in his 'lost tapes' project, K.I.N.E.T.I.K. unearths the follow up to his debut album, The Kinesis Thesis Vol. II.

At a total of six tracks, this release is a short and sharp shot of beats, rhymes and life. Initially released in May 2011, this second installment in the fan-favourite series came together as a pastiche of unfinished ideas, demos and leftover tracks from previous recording sessions. As usual, K.I.N.E.T.I.K. is in top form in the bars department but with a confrontational twist.

On Run Dem, he squarely aims the banking system and government politics. On the cleverly titled, The Grace Of God, fire and brimstone reign from the microphone as he calls out religious hypocrisy whilst confronting his own demons. This EP also marks the first-ever collaborations with Micall Parknsun, Kuroisoul and TE1 Productions - all of whom K.I.N.E.T.I.K. still rocks with to this day.