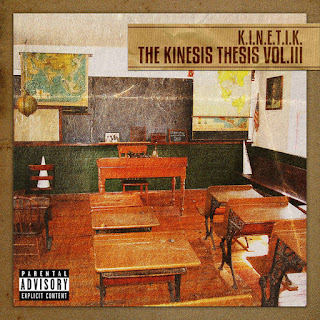 The last 'lost tape' is finally here. Many parents with more than one kid will often say that they don't have a favourite child. Not K.I.N.E.T.I.K. though. He will tell you himself; this album is his baby.

The Kinesis Thesis, Vol. III (initially released in June 2012) is where K.I.N.E.T.I.K. discovered his authentic self. Following the dissolution of his group a few months prior, K.I.N.E.T.I.K. was on his own again but this time, with the proverbial chip on his shoulder and feeling like he had something to prove. Throughout the blistering nine tracks, the listener is treated to equal parts of half man, half amazing in copious amounts.

On the Micall Parknsun produced Here We Go, K.I.N.E.T.I.K. picks spots and licks shots with a relentless flow jam-packed with posturing punchlines and cheeky humour. On the Year Of The Underdog Remix; he is joined by his rhyme writer partners Jaunty and K-Nite 13 to tell stories of their respective come ups over TE1's mysterious yet funky get down.

Fatherhood finds K.I.N.E.T.I.K. taking absent and inactive Dads to the task and scolding them for their lack of commitment before penning a heartfelt verse to his yet to be born child. If and when he or she arrives, it is bound to be an emotional moment. The album is rounded out with Number 3 where the former Energy Man explores the significance of the number with abstract wit and reflective aplomb.

Dialogue and digits get busted wide open as K.I.N.E.T.I.K. skillfully brings the trilogy to a rousing end.


The third time was indeed a charm, and seven years later, this project remains a critically acclaimed cult classic.


The Kinesis Thesis, Vol. III is out now on Ten Pounds Of Gold.