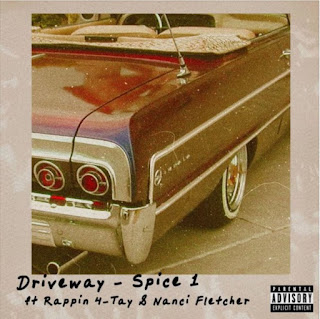 A true O.G., Spice 1 is West Coast royalty.  Over the course of his prodigious thirty-year career, Spice is responsible for a handful of classic albums; three of which have attained Gold plaques.

After a lengthy layoff, Spice 1 returns with a new album, Platinum O.G., which will be released on 7-26-19.  After premiering the first single, “Since 85,” featuring Devin The Dude & Kurupt with Ambrosiaforheads, Spice is back with a new single, “Driveway,” which features fellow West Coast stalwarts Rappin 4-Tay and Nanci Fletcher was premiered today by HipHopDx.

California offers numerous distractions.  Warm weather, scenic ocean views and a breeze that feels sun-kissed.  These types of diversions make it much easier to relax, let your guard down--- and in a flash become exposed.  As Spice and 4-Tay display, getting caught slipping is not an option; as their main ambition each day is to make it back to the “Driveway” safely.

“This album is like my All Eyez On Me to the world” Spice 1 commented.  “It’s me and my homies, some here, some not with us anymore, bringing that west coast gangster shit on some banging ass beats.”