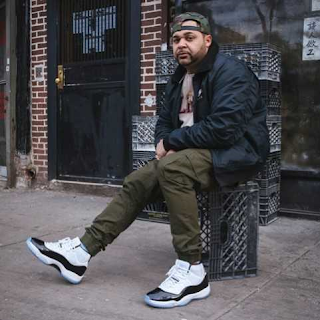 Brooklyn’s Joell Ortiz started on none other than Dr. Dre’s Aftermath label and built a huge buzz in the industry.  He’s worked with legends like Just Blaze among others. He then signed to Shady Records as ¼ of the super-group Slaughterhouse. He’s worked with Hip-Hop titans Eminem, Busta Rhymes, Jadakiss, Akon, and Big Daddy Kane.
Joell Ortiz’ previous project on Mello Music Group, Mona Lisa, was a collaborative effort with Apollo Brown (who also returns to produce two tracks on Monday) and it made quite an impact at retail upon its release; premiering at #3 on the iTunes Hip-Hop chart, it also premiered at #3 on the Amazon Hip-Hop chart and held down the #1 spot on Bandcamp’s bestseller list.
It's been a busy week for Joell Ortiz. He's been in the middle of a full swing press tour for his new album Monday. After recording a “CTRL” performance at VEVO, he sat down with DJ Kay Slay, Showoff Radio with Statik Selektah, a performance at SIRIUS with Gray Rizzy and he will be joining Lord Sear today at 1pm est.  Meanwhile his video for "Before Hip-Hop" is racking up views on YouTube and Uproxx & Genius named Monday one of the top LP’s of the month and BET featured Joell on Rate The Bars.  The Slaughterhouse MC is still reminding people why Yaowa Nation remains strong.  But, if after all that you still missed it, now is your chance to take in the full-album.

"I’m back to work. Monday is the start of the week. The grind!” Joell asserted. “Working people normally dread Mondays. Not me though; I embrace them! Feels like another opportunity. Another chance. The beginning of what’s ahead. On Monday I talk about life. Old me, new me, and the guy that next Monday may introduce to you all."
Joell’s new album, Monday, features production from Big K.R.I.T., Nottz, Apollo Brown, J.U.S.T.I.C.E. League & Heatmakerz and is now available via Mello Music Group.