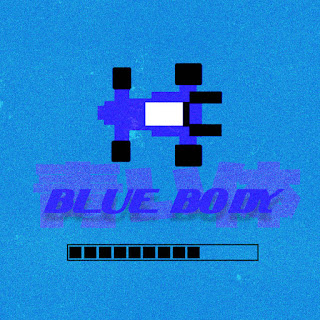 BluFlame James rolls through with a breath of confidence on his recent project Blue Body. Delivering from an outnumbered town of Hartsville, SC, BluFlame James turns his first LP into an established piece of work. James covers all aspects of the project to his own accord; he produces, mixes and masters, and fleshes out the cover art exclusively by himself. The LP's single "Famous" has since received a music video that he put together on his own as well. This independent work habit "turned from desperation into actual fascination" James phrased when speaking on the concept.

The project is throughly detailed with intricacies but is not obsessively polished, making for a nice home-cooked feel. Throughout Blue Body James flips samples both classic and obscure. The production sets the tone for his rubbery yet excited delivery. Beats range from fit for Adult Swim bump to sticky southern cuts, both of which ends can bring out strengths from James. While maintaining originality is a clear draw from the project, you can't help but hear some Big Krit, Pimp C, or others of the same ilk in his vocal presence.

Tracks 1 through 10 bring something worth taking home. Blue Body is impressive down to the skits and dialogue to the timing of the beat breaks. It doesn't overstay its welcome. The Carolina rapper shares a chunk of his life without telling it literally. Blue Body is a good starting point that leads a listener into waiting for more.

Be sure to give it a listen below.

When speaking on the album and his artistry BluFlame James had this to say:

"Blue Body is a loose concept album about the trials of the character Teddy Redwater. He is faced with the untimely death of his older brother and starts the album off referring to him in a therapist like manner. The album goes on and exposes two other perspectives, Teddy's son, who he is giving advice to on the end of "Snake Way", as well as "the Rapper", who is introduced on the song "Spare Parties" whom Teddy proceeds to rob in the ending skit. All in all, the album is a short, but intertwining story about a black man from the south caught up in the seemingly fast paced life of part time crime, parenthood, activism, bereavement, weed, social media fame, and much more.
Plus I can rap my ass off so there's that."